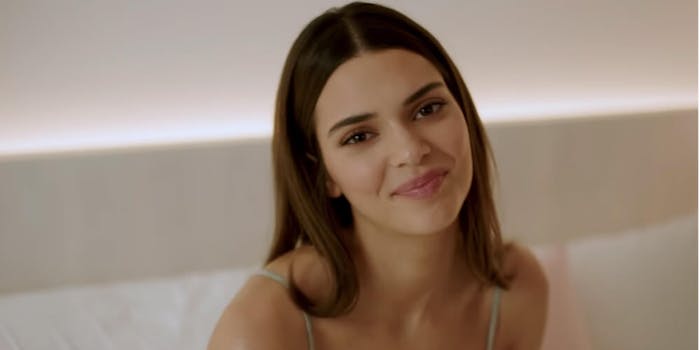 Jenner's dog, Pyro, was spotted in a prong collar.

Kendall Jenner is drawing attention online after a photo of her walking her Doberman surfaced.

Her dog, Pyro, is wearing a prong collar, which is designed to put pressure on a dog’s neck in order to train a dog to not pull on their leash when walking. Many animal advocates consider the collar to be a form of animal abuse.

However, some disagree, alleging the collars pose no real threat to dogs because the prongs merely mimic “corrective bites” from other dogs.

The Twitter account for Pop Crave Music tweeted out the controversy, along with the photo in question and a stock photo of a prong collar for reference.

Kendall Jenner is being criticized for using a "cruel" dog collar on her dog. Animal organizations urge dog owners to not use them, claiming they risk "injury, pain and suffering" to pets. pic.twitter.com/nn4X8Tg7YY

“Kendall Jenner is just gross. Cutting your dogs tail, sticking rods in its ears, training it with devices that cause pain. All so she can get a cool pic for her Instagram, not to mention she’s had about 5 different dogs. Whatever looks aesthetically good with her feed. Gross,” Twitter user @blondelebowski wrote.

One Twitter user who claims they used to work at an animal shelter wrote that the collars hurt dogs but do not pinch them.

“I see so many rich people use these. These collars are for dogs who aren’t trained well and ready to attack anyone and you use these collars to calm them down. It’s like a electric dog collar,” they tweeted.

I used to work at a dog shelter and I see so many rich people use these. These collars are for dogs who aren’t trained well and ready to attack anyone and you use these collars to calm them down. It’s like a electric dog collar. Tbh does it hurt the dog, no, but it does pinchthem

Another user even alleges that they tried the collar on themselves once “to make sure it doesn’t hurt them” and came to the conclusion that the collars don’t hurt.

y’all. they don’t hurt them. it applies a little pressure to help discipline them. if it hurt them they would cry and whine. and that dog don’t look like it’s hurting to me. I thought the same thing myself until we got one and I tried it myself to make sure it doesn’t hurt them.