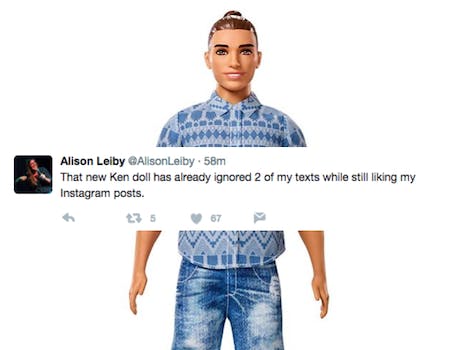 Whether you like it or not, Man Bun Ken will probably sell out.

Gone are the days of chiseled abs, odd genital lumps, and surfboard accessories. Ken has evolved, and with his new transformation comes a man bun and a dad bod.

On Tuesday, Mattel unveiled its line of Fashionista Barbie and Ken dolls. The dolls feature new skin tones, hairstyles, recent fashion trends, and different body types. However, the internet is only interested in the 15 “hip” Ken dolls. Mattel made headlines in 2016 with their full-figured Barbie, but this year, it’s Ken who’s stealing the spotlight.

“By continuing to expand our product line, we are redefining what a Barbie or Ken doll looks like to this generation,” Barbie senior vice president and general manager Lisa McKnight said in a statement. “Evolving Ken was a natural evolution for the brand and allows girls to further personalize the role they want him to play in Barbie’s world.”

Evolving Ken may have been an obvious choice for Mattel, but fans are not taking the changes lightly.

That new Ken doll has already ignored 2 of my texts while still liking my Instagram posts.

The new "Man Bun" Ken doll comes with shirt, shoes, and keys to Barbie's car that he's driving until he "gets back on his feet again." pic.twitter.com/gYmXwR9WEc

Why was I not aware they made the new Ken doll after me??? #Barbie #KenDoll #CoreyDoll pic.twitter.com/BO3fXuocoP

The new “hipster” looking Ken doll isn’t the first bold move Mattel has made to the clean-cut boyfriend. In 1992, Mattel unveiled “Earring Magic Ken,” which you guessed it, wears an earring. Like their recent changes, Mattel explained back in the ’90s that the change was due to their need to keep Ken “cool.”

While some may be dragging the prototype, others are celebrating the doll’s new look.

oh my gosh I want a man-bun Ken immediatelyhttps://t.co/eQjT1MHwer

Is it weird that I find the new Ken doll, with a man bun, attractive?

Sadly, the Ken dolls are not available in stores just yet. Check out the Barbie website for more information, or just stare at them online, like you would any other crush.