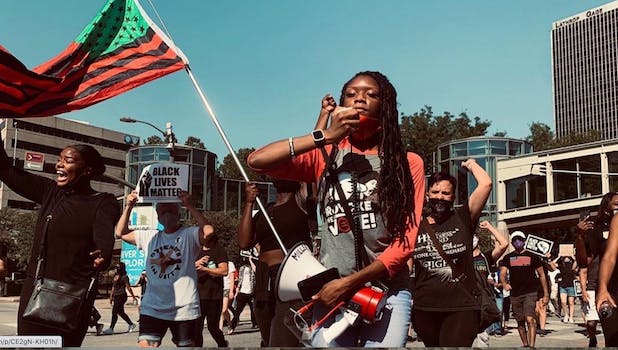 After going viral for calling for the resignation of the Kansas City, Missouri, police chief, a Black activist says police officers continue to follow her, Black Enterprise reports.

Keiajah Brooks on Sunday tweeted a series of videos of police cars around her and wrote, “HOW KCPD WILL TRY TO KILL ME: A THREAD.”

In one of the videos, Brooks approaches a police car and says, “This is the third time.” She continues to tell the police that she sees them following her, and the police drive away.

“There’s literally no logical reason for KCPD to be back here, when the action isn’t back here because this is a parking lot,” Brooks said. “The action is up there, why not drive on the main street?”

Brooks spoke in front of her local police commissioners and criticized their treatment of Black individuals. In a 4-minute video shared to Reddit, she named specific officials and said, “I’m not asking y’all for anything, cause y’all can’t and won’t be both my savior and oppressor.”

Brooks, who did not immediately respond to the Daily Dot’s request for comment, also allegedly received a message on Instagram from an individual wishing for Brooks to “get shot in the face.”

She posted a screenshot of the message and said, “I’m not in any way, shape, or form scared. relax. honestly. and that’s in YOUR best interest. not mine.”

Brooks posted on Instagram that she is under NFAC protection, which is the “Not Fucking Around Coalition” that consists of all Black men and women, according to CNN.

Police deny that Brooks has been followed. In a statement to the Daily Dot, a spokesperson for the Kansas City Police Department said, “Police have not and will not follow or harass anyone making comments to the Board.”