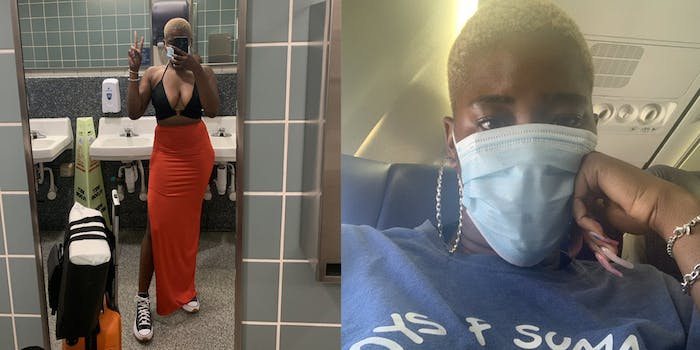 The woman documented the incident with a series of tweets and videos.

As Kayla Eubanks was about to board a Southwest Airlines flight on Tuesday, she claims an employee stopped her and told her she was violating the airline’s “dress code” and was not able to do so. Eubanks documented the incident with a series of tweets and videos.

“Y’all I was KICKED OFF my @SouthwestAir flight because my boobs are ‘lewd, obscene and offensive.’ I was told that passengers may look at me in my attire and be offended,” she tweeted, including a photo of the “attire in question.”

“I really wanna know why @SouthwestAir is policing my clothes like this,” she said in another tweet. “How will my shirt impact my flight, for myself, the other passengers or even the pilot? Y’all have a dress code for CUSTOMERS who pay to get on a plane? It’s the constant policing of women’s bodies for me.”

Eubanks recorded as an employee searched for the “dress code policy” the airline was trying to enforce. In the video, Eubanks says she waited for 20 minutes while the employee looked for the policy.

The employee can be heard telling a co-worker to “close the plane in three minutes” and then offers to get Eubanks on a different flight if she chooses not to comply with the rules.

Eubanks explained on Twitter that the only people who gave her any flack about her clothing were employees.

“I kid y’all not, from the moment I stepped into my departing airport, to the duration of the flight and even after I landed, I was harassed,” she tweeted. “Not by passengers, but by Southwest employees. Half of the employees were complimenting me & the other half was asking where my shirt was.”

In the video, one of the employees gets a hold of the captain so that he can speak to Eubanks. He approaches Eubanks, saying, “They’re hating on you because you’re looking good, is that right?”

The captain asks Eubanks that if the policy says she has to dress differently, will she comply. Eubanks says she would have to see the policy first.

The captain eventually loans Eubanks a T-shirt that she puts on to get on the plane. She later takes the shirt off, prompting supervisors to speak with her upon landing.

She also recorded that conversation. In the video, the supervisors agree with the employees that the top “revealed quite a bit” and that “maybe others on the aircraft” will consider her top to be offensive.

In a statement, Southwest Airlines told the Daily Dot: “Our Employees are responsible for the well-being and comfort of everyone onboard the flight. We do our best to promote a family-centric environment, and we count on our Customers to use good judgment and exercise discretion while traveling. Regarding our policies, each situation is very different, and our Employees are responsible for following our Contract of Carriage, which is available on our website. The Customer was allowed to travel on her scheduled itinerary, and we also reached out to her directly to apologize for her experience and provide a refund of her fare as a gesture of goodwill.”