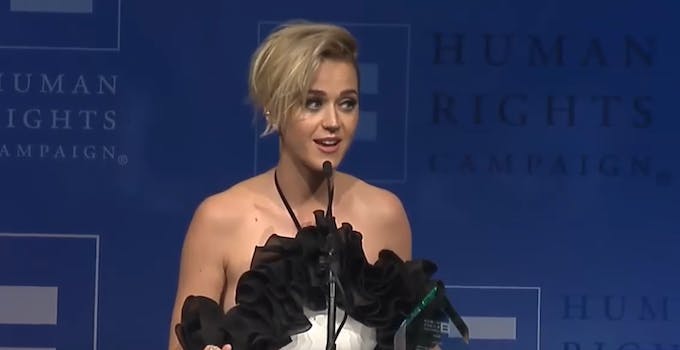 'Most of my unconscious adolescence, I prayed the gay away at my Jesus camps.'

When it comes to LGBTQ rights and Katy Perry, most fans remember the singer for her 2008 hit “I Kissed A Girl.” But Perry’s support for the queer community has grown over the years. On Saturday night, she was presented the National Equality Award at the Human Rights Campaign Gala. And in her acceptance speech, Perry opened up about her own sexuality amid her religious past.

“When I was growing up, homosexuality was synonymous with the word abomination. And hell,” Perry said during the speech. “A place of gnashing of teeth, continuous burning of skin, and probably Mike Pence’s ultimate guest list for a barbecue… So most of my unconscious adolescence, I prayed the gay away at my Jesus camps.”

She also talked candidly about her sexual relationships with other women.

“I speak my truths and I paint my fantasies into these little bite size pop songs,” she explained. “For instance, ‘I kissed a girl and I liked it.’ Truth be told: a) I did more than that, but b) how was I going to reconcile that with a gospel-singing girl raised in youth groups that were pro-conversion camps?

“What I did know was that I was curious. And even then, I knew sexuality wasn’t as black and white as this dress.”

Perry was raised by two Pentecostal pastors, attended religious schools, and largely listened to gospel music due to her family’s insistence. It wasn’t until her friends introduced her to pop songs that she was able to experience a wider understanding of music.

Perry wasn’t always championed as an LGBTQ rights activist, though. Her 2007 single “Ur So Gay” was criticized for homophobic lyrics, and “I Kissed A Girl” raised controversy at the time for supposedly relying on a bi-curious approach to bisexuality without shedding a spotlight on bisexual sexual experiences. Since then, Perry has changed her mind, as well as her approach to LGBTQ issues.

“I’ll never cease to be a champion, an ally, a spotlight, and a loving voice for all LGBTQ-identifying people,” she said. “And I will continue to champion the people that have been a champion for me.”