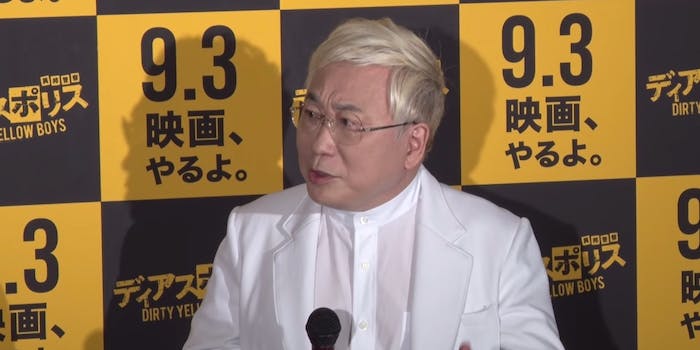 The attack on Kyoto Animation Studio on July 18 is one of the worst mass killings in current Japanese history. The act of arson resulted in the death of 34 individuals and the critical injury of several others.

Houston-based Sentai Filmworks, which localizes and licenses Japanese media, has raised over $2 million to help the victims of the incident through a GoFundMe.

Help us help our friends at Kyoto Animation by donating (if you can) or sharing: https://t.co/Fg599lm5Dy

Now, Dr. Katsuya Takasu, Japan’s leading cosmetic surgeon, has publicly announced that he would provide medical treatment free of charge for the victims of the attack.

On a surface level, the news sounds entirely positive. However, apart from his technical skills in the field of surgery, Takasu is also well known for his controversial views and outlandish publicity stunts. After the release of Pokémon Go, Takasu said he intended on renting a helicopter to attempt to “catch ‘em all” as quickly as possible. Takasu’s other public actions are infinitely less jovial, however.

In 2017, Takasu received condemnation from the Simon Wiesenthal Center, a U.S.-based Jewish human rights organization, after he denied the severity of the Holocaust and praised Nazism in a series of tweets.

“I think both Nanjing and Auschwitz are forged,” one tweet reads. Takasu is arguing that the death tolls during the Holocaust and the Nanjing Massacre–a terrible war crime committed by the Imperial Japanese Army against Chinese civilians–have been greatly exaggerated.

“I met Professor Emeritus Kuroki who taught me the greatness of the Nazis at Kiel University in Germany. I was encouraged,” another reads.

He later defended his pro-Nazi science statements in a response to a critic.

“Japan’s medicine was German medicine until it lost to the Great East Asia War. The development of German medicine under the Nazi regime was remarkable. What’s wrong with being reunited with Professor Emeritus Kuroki who taught me that,” Takasu wrote.

Takasu was expelled from the American Academy of Cosmetic Surgery in November of 2017.

A post on the r/Anime subreddit detailing Takasu’s announcement of charity for the Kyoto Animation victims was met with a mostly positive reception. The post quickly shot up to the front page of the subreddit and earned nearly 8,000 upvotes.

Not to mention the fact that this is uncontroversially (99% upvooted) on the top of r/anime's frontpage, with a heavily-praising, uncritical title.

Like, yeah, it's really nice that the victims will get free reconstructive surgery. Not nice enough to praise A HOLOCAUST DENIER pic.twitter.com/LBZz3xxZhr

Some high-scoring comments on the post ended up defending Takasu’s views in light of this act of goodwill. “If he have the skills to heal the victims, then any help will be appreciated. I don’t give a shit whether he likes Nazi or not, his beliefs are irrelevant if he can and willing to help the victims,” wrote redditor u/Irisena.

Additionally, some in the thread even agreed with Takasu on the possibility of a death toll number conflation. “The Allies did exaggerate the numbers, 4 million dead at Auschwitz is now 1.2 million, ” wrote redditor u/Kiru-Kokujin52.

Although criticisms of Takasu’s views were present in the thread, they were few and far between when compared to the comments celebrating his act of charity.

The thread was eventually locked by the moderators of  r/Anime due to “questionable comments being posted.”