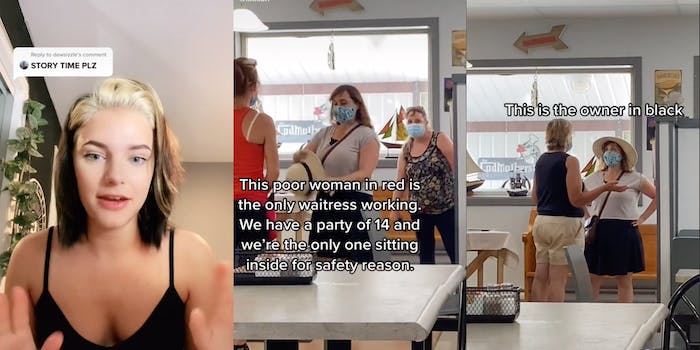 'No wonder restaurants can’t find anyone to work in them. It’s a war zone.'

Video footage shared on TikTok shows a “Karen” and her mom harassing a waitress in Ontario, Canada after she wouldn’t seat them in the restaurant due to COVID-19 restrictions.

The footage, posted by @Kkillen or Kei on TikTok, received about 1.5 million views, but some viewers are more upset at Kei than the Karen.

Karen can be heard telling off the waitress for not greeting customers “right.” Then she repeatedly yelled at the restaurant owner, claiming that the waitress screamed at her. The owner can be heard arguing with Karen, but it didn’t seem like she was listening.

“That poor waitress.. No wonder restaurants can’t find anyone to work in them. It’s a war zone,” one viewer commented.

According to Kei, who posted a follow-up TikTok further explaining the situation, there was only one waitress working at the restaurant when Karen and her mom walked in. This was because the second waitress bailed after Kei and their party of 13 others entered. Since their party was so large, the group were the only ones seated on their floor of the restaurant due to COVID-19 restrictions.

After the second waitress ditched, the other waitress—who the Karen yelled at—tried to accommodate Kei’s party as much as possible while also taking care of the second floor guests.

“We felt terrible having to watch her run around and split our checks into three different families, it was awful,” Kei said in the TikTok. “We felt so, so bad for her.”

Meanwhile, the Karen came in through the patio and demanded to be seated, but the waitress asked her to wait a few minutes. Five minutes later, Karen came back and seated herself inside the restaurant.

The waitress told the Karen the restaurant was already at capacity. That’s when the shouting incident in the first TikTok happened.

Kei claimed the Karen yelled at the waitress, “You don’t even have you mask on right, you fucking bitch.” But as Kei pointed out, the waitress had her mask on just below her nose because she’d been running around the restaurant taking care of everyone on her own.

Despite Karen yelling at the waitress, TikTok viewers were quicker to roast Kei and their party for splitting the check and apparently making the waitress’s life even more difficult.

“You watched all that waitress was going thru and then asked for 3 separate checks? Really?” one viewer commented.

Another user wrote, “I think I am more annoyed y’all split checks on this poor waitress than the Karen.”

But several other viewers, who claimed to be from Canada or the UK, jumped to Kei’s defense.

“Y’all need to CHILL on the split bill. It is a Canadian thing 100%. Wait staff will ask if bills are together or separate. It is normal to us,” one viewer said. Another commented, “Guys in most Canadian restaurants they use a POS system where each seat gets its own bill and it’s very easy to split. Not everything is like the US.”

“Is it not normal to split a bill in the US? Its normal in the UK why y’all so pressed?” a different viewer asked.

Kei responded in the comments as well, saying they had no say in how six adults decided to spend their money.

Seemingly to make things better, Kei said in the TikTok that their party bussed their own tables and tipped the waitress a cumulative $100.

“We felt terrible,” they said again.

Kei did not respond to the Daily Dot’s request for comment.