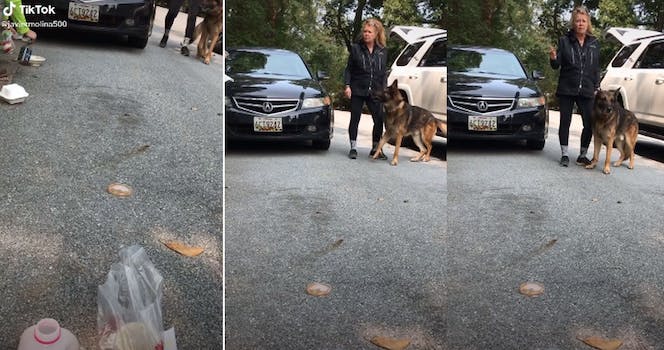 That she believed she could brandish the dog as a weapon is heinous.

“Karen with a dog”—it was only a matter of time. A recent TikTok has made the rounds showing a Karen in Pennsylvania bringing out her German shephard to threaten Hispanic workers.

The account, @javiermolina500, regularly posts videos related to construction and after-hours activities. But this video, published yesterday, shows the treacherous part of his job, where a Karen felt the need to jump out of her SUV with her trained German shepherd.

Molina and his co-workers were having lunch, sitting on a curb, apparently near this woman’s property. With the dog leashed, the Karen got in her don’t-you-know-who-I-am stance and immediately tells the dog to bark. The pup doesn’t look too enthusiastic at first.

“Bark, bark, next command bite,” the Karen threatens, snapping at one of the men. “Get off my lawn.”

But Molina doesn’t budge: “This is just a street here; it’s not your property here.”

The video ends with the woman retreating to her car.

On Reddit, commenters mostly discussed how the woman was out of line. u/hear4theDough wrote: Even if it was her property, making your dog attack people is a great way to I) have your dog destroyed and II) loose your property in a civil lawsuit.”

Pennsylvania has laws pertaining to dogs, including: “All dogs must be under control and must not be allowed to run at large. Dogs are personal property, and owners are responsible for damages caused by their dog.”

However, what’s unknown is whether Molina and the construction crew were actually on the Dog Karen’s lawn. Moreover, the idea that she believed she could virtually brandish the dog as a weapon is particularly heinous.