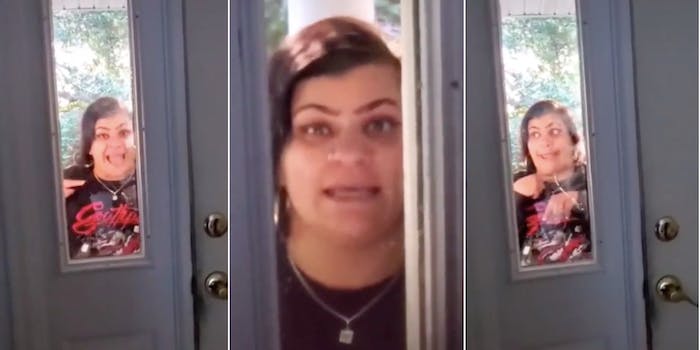 'I have ways in, and your dog won’t be breathing tomorrow.'

Stealing your neighbor’s Wi-Fi is a national pastime. We all do it with the understanding that eventually, we’ll probably get caught, and our neighbors will change the password. But one “Karen” refused to take “no” for an answer and threatened to kill her neighbor’s dog if she didn’t get the new Wi-Fi password in a viral TikTok.

Content Hub uploaded the video in two parts on Sunday. It opens with Karen standing outside her neighbor’s door, trying to coax the Wi-Fi password out with a variety of threats, sounding like a cross between Janice Soprano and Annie Wilkes from Stephen King’s Misery.

“I live here! It’s illegal,” Karen yells from the doorstep. “Come outside, let’s talk. Give me the fucking Wi-Fi before you get arrested, and your mom.”

“You want me to try that way, or you want your dog to come dead?” Karen asks. “I have ways in, and your dog won’t be breathing tomorrow.”

Despite the fact that she is very clearly not going to get the Wi-Fi password, Karen stays on her neighbor’s doorstep, waving and smiling creepily through the window. Then she takes her pointer finger and makes a slicing motion under her throat.

“Dog. Doggie? Dead,” Karen declares. “You’re not gonna fuck with me. Because when you’re outside by yourself one day, you’re gonna be fucked.”

Karen tells her neighbor she’s going to poison the dog, claiming it’s “not against the law” because it’s “not a human being.”

“What are you gonna do? Find a new one?” she asks. “You’re not gonna fuck with my life, little bitch.”

The second part of the video—the part about the poison—has been viewed more than 4.3 million times on TikTok. Ironically, the video lags heavily in spots, a fact that was not lost on commenters.

“AYO WHY SHE LAGGING,” one user asked, while another conjectured, “Bruh she’s lagging irl that’s why she needs it.”