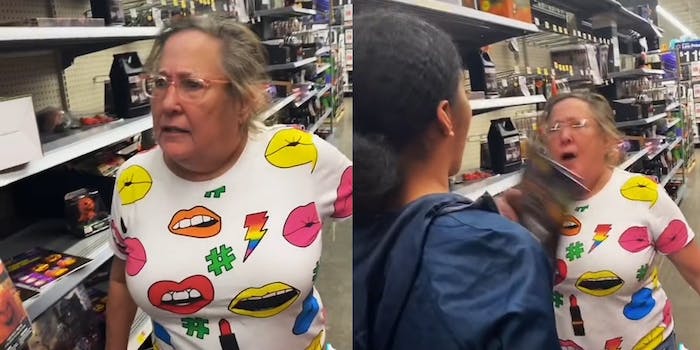 ‘I am not a Karen’: Woman allegedly calls Black woman N-word during Walmart confrontation in viral TikTok

The 'Karen' label seemed to escalate the confrontation.

In a TikTok posted this by Trinity Graves (@trinitygraves23), a white woman is seen yelling at younger Black woman that she won’t be called a “Karen.” In the video’s comment section, Graves wrote that the white woman called her friend, the Black woman shown, the N-word. It’s unclear if this is true, although the TikToker claims the incident got the so-called Karen kicked out of the store.

“My friend and I were in tears after experiencing racial discrimination and white privilege while trying to shop,” Graves continued. “She was kicked out of Walmart”

Graves provided more context in the comments as well.

“I was with my friend at Walmart and she was being rude,” she said of the woman shown in the video. “She proceeded to call my friend a [N-word] because she called her a Karen! She was racist.”

A commenter who identified herself as Graves’ friend in the video wrote that the woman said, “Don’t you see me shopping here you need to move out of my way.”

Some commenters on Graves’ video didn’t agree with her interpretation of events.

“Why are you messing with an old lady,” commented @sarasarasaraooo.

“If course they only show a small clip and no explanation,” wrote @sarahboyd0805. “Older lady was probably correct!”

“Those girls are the problem not the old lady,” commented @markbuchanan835.

Graves responded to @markbuchanan835’s comment reiterating that the white woman was kicked out of the store after their interaction.

Other commenters agreed with Graves that the white woman was out of line.

“The only ppl getting heated over being called a ‘Karen’ are Karen’s!” commented @jessica_2780.

Karen has become internet slang for an entitled, and often racist, white woman who causes a stir in public. Videos of these incidents routinely go viral online. As a result of the term’s popularity, many so-called “Karens” take offense to the label and falsely equate it with racist slurs.

The Daily Dot has reached out to Graves via TikTok comment, and Walmart via email.