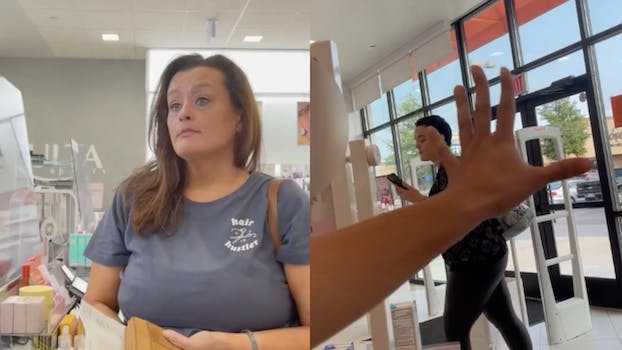 'It's random words strung together.'

A TikToker shared three videos featuring her encounter with a Karen at an Ulta store.

The videos, posted by TikToker Jacquelyn Switzer early Friday, have been viewed over 2 million times and show the woman accosting Switzer and her mother. The Karen in question, however, made little to no sense as to why she was accosting the pair in the videos, leaving many to speculate the cause of her outburst in the comments sections.

The first of the three videos, which has over 300,000 views, starts with the woman rudely interacting with an Ulta employee who is behind a register before berating several other customers.

She continues her rant until one customer says, “What are you talking about lady?” to which the Karen seemingly sarcastically replies, “I have no idea!”

The second video garnered over 304,000 views and the third amassed over 1 million views. Switzer also posted the videos to her Instagram Story with additional context. “At Ulta, a woman referred to my mom as my ‘Black friend,'” the text says. “Threatening to call [the police] because she believed we were stalking her. She proceeded to harass my mom and I, get very close to us, followed us, and wouldn’t let us leave by blocking the door. For 20 minutes.”

Switzer alleged that the woman believed she and her mom were “stalking her neighborhood” and tried to have the Ulta employees call law enforcement on them but that the workers refused because Switzer and her mom weren’t doing anything wrong.

Switzer can be heard asking the woman to move away from her in the videos and wrote on her Instagram Story that she was afraid of going to her car because she didn’t want the woman to follow her and figure out her license plate. The woman was later escorted off the premises by law enforcement, Switzer’s Instagram Story said.

Most TikTokers in the comments section of her videos point out that the woman’s rant was nonsensical. “I feel like I’m having a stroke,” one person commented. “I don’t understand a word she’s saying. I just hear words.”

Switzter did not immediately respond to the Daily Dot’s request for comment.