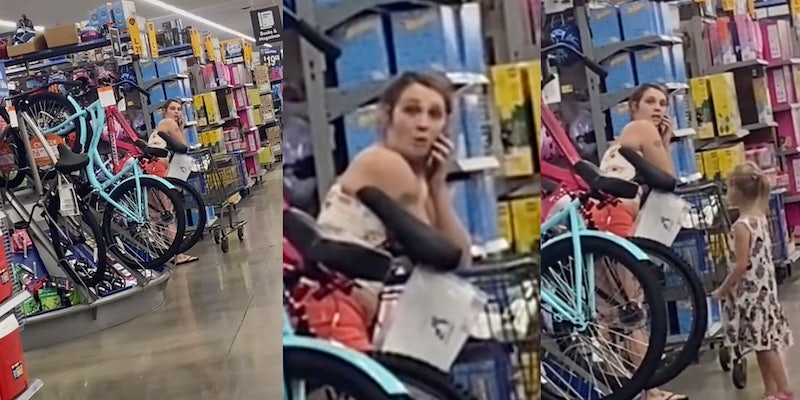 ‘You wanna go outside?’: Karen tries to fight minors at Walmart

A teen TikToker captured video of a Karen in the wild after supposedly offering the woman a leaf at Walmart.

The video, captured and shared by @cadie.mae3, who simply goes by Cadie on TikTok, was filmed on Aug. 25. In the weeks since it was filmed, the brief, contentious clip has become the most popular on her page, with upwards of 5.2 million views and hundreds of thousands of likes.

As the video begins, Cadie and her friends can be heard giggling as one of them notes that she “took a video.” The video she is referencing, which Cadie later uploaded, doesn’t provide any additional context. It merely shows the girls walking through the store.

Moments later, the Karen in question makes her entrance. Unmasked, the woman appears to be on the phone as she leans on a cart near her daughter. From several aisles away, she asks Cadie and her friends if they “wanna go outside.”

Cadie responds that she is a minor, to which Karen flatly responds “I don’t care,” before bafflingly adding “then maybe you should act like one.”

Cadie and her friends remind Karen that the argument was started after they asked the Karen “if you wanted a leaf.”

“Why are you gonna fight me over a leaf,” Cadie asks. The Karen indicates that her anger has nothing to do with the odd leaf offering, instead claiming that the girls were “talking shit too.” The girls deny this, but the woman claims that “multiple other customers” also saw the teens “talking shit” and reiterates that she doesn’t care that Cadie is a minor.

When one of the teens points out that the Karen’s young daughter is standing nearby, the woman doesn’t miss a beat. She claims, in escalating furious tones, that “her grandma’s outside so I’ll give her to her grandma, and we can go outside and I can beat your ass.”

The Karen gets even more upset when one of the teens inquires after her age, shouting that it “doesn’t matter” before adding that she doesn’t “give a fuck, y’all wanna act like you’re my age, you can do like you’re my age.”

Cadie, sounding baffled, again informs Karen that the teens simply “offered you a leaf,” which only seems to further annoy the increasingly irate woman. Karen furiously calls the teen a “ugly ass b*tch” before turning and walking away.

The comments on all of Cadie’s TikToks are turned off, but multiple other creators chimed in on the drama via duets and by using the sound from Cadie’s original video.

In response to a critical response from user @flavafrl, Cadie commented that the Karen “followed us around the store.” She added that they “said sorry” after offering the leaf, but the woman proceeded to get “upset” and follow the teens around Walmart. She also noted that “everyone thinks we were messing w her” but claims that they were not and the Karen simply “wouldn’t leave us alone.”

She also claimed, in response to user @trynajean12—who claimed that the Karen was her sister—that the woman was “yelled at by managers.” She noted her interest in locating security “footage from Walmart” so that she could prove her innocence. @trynajean12, meanwhile, maintains via comment that her sister was minding her own business.

Despite the age of the clip, neither Cadie nor @trynajean12 have posted any further updates on the incident.

The Daily Dot reached out to Cadie via TikTok direct message, and @trynajean12 could not be reached for comment.