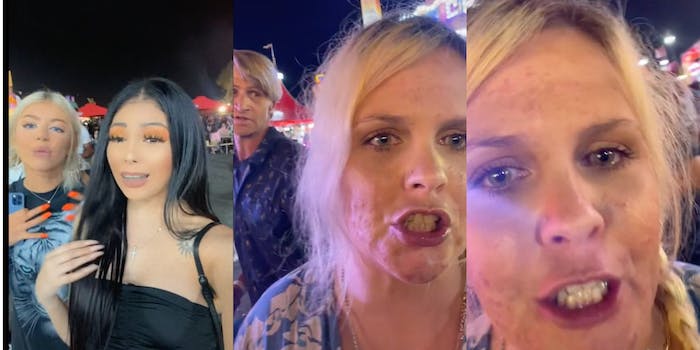 ‘I’m about 2 seconds from socking you’: Karen threatens two women over their outfits, calls them wh*res

One woman felt singled out because other fairgoers were similarly dressed, but she was 'the only Latina around.'

Viral TikTok footage shows a Karen absolutely losing it at a carnival and threatening two women over their outfits. The video currently has 3.3 million views.

The TikTok, posted by @rxqueeen, shows two women showing off their makeup and outfits before the white Karen yelled in their faces.

“You better fucking quit because I’m two seconds from socking you,” the Karen warned.

The Karen told Rxqueeen and her friend to “fucking stop,” adding that she had her 10-year-old child with her. A man with the Karen appears to guide her away before things get more heated. The Karen and her family are then seen walking away from the situation. Presumably she wanted to set a good example for the child, but as Rxqueeen told her, “this is a bad example.”

“‘IVE GOT MY 10 YEAR OLD WITH ME’ proceeds to swear like a sailor,” one person commented. Another said, “How is she gonna tell you to stop bc there’s kids present but she’s out here cussin like it’s nothing.”

“Bro I got so scared when she popped up in my screen. Scary af,” one person commented.

In a video update, Rxqueeen shared more details behind the situation.

She said she and her friend were moving their heads to the music at the fair—“you know, vibing”—when the Karen whipped around and told her to “stop dancing like a whore.”

Rxqueeen said she got upset because there were other fair attendees around them who were dressed skimpily, but she felt the woman targeted her because she was the only Latina. The rest of the crowd, including the Karen, appeared to be white.

Rxqueeen did not respond to the Daily Dot’s request for comment.