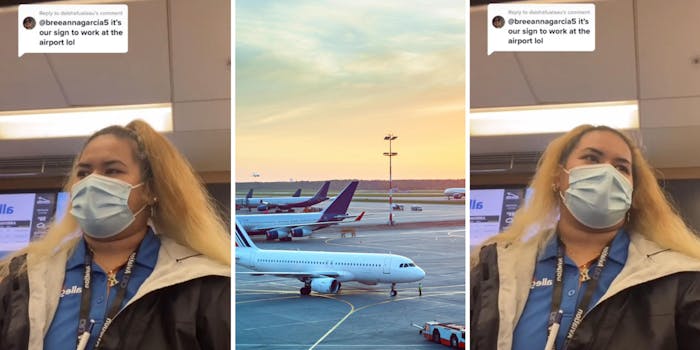 ‘I would have lost my job that day’: Woman tells airport worker to ‘go back to Mexico’

'You still wanna work at the airport?'

A worker filmed herself getting berated by a woman at the Asheville Regional Airport in North Carolina. The woman told the worker to “go back to Mexico” at one point during their encounter.

The video was posted less than a week ago by the worker, Isha Mudong (@isha_kuni04), to TikTok.

Mudong was responding to a comment left by @daishafualaau that says “it’s our sign to work at the airport lol” after Mudong and her co-workers danced around their workplace in another video.

“You still wanna work at the airport?” Mudong captioned her response video featuring the “Karen” encounter.

The interaction between a woman and Mudong begins after the employee asks, “How are you?” to which the customer exasperatedly responds, “I just need a boarding pass, please. All right. I need one quick.”

The conversation escalates when Mudong, who appears to be wearing an Allegiant Air uniform, asks the woman if she has a face mask she can wear. The woman claims she does not and that she has a doctor’s note stating she cannot breathe with a mask on. Both Allegiant Air and Asheville Regional Airport current policies state that masks are recommended but not required. It is unclear when the incident occurred and if the policies have been the same throughout the pandemic.

“So, they aren’t going to let you on the flight unless you have a mask,” Mudong says to the woman in the video.

“I expect to make this flight without this mask,” the woman says. She proceeds to throw the mask back at Mudong, and continues: “You understand, you incompetent. … Go back to Mexico, where you belong. How hard is it? Just print my boarding pass.”

Mudong keeps her composure as she types on her computer, avoiding eye contact with the customer.

The video has 5.4 million views and 1.1 million likes. In the comments section, users are shocked and angry at the behavior Mudong, who is from Micronesia, received.

“@Allegiant Airlines can we get some recognition for the way she handled this situation?” @charlottehavili commented.

“Ma’am I can’t get your boarding pass if I have to go to Mexico,” another user joked.

“I would have lost my job that day,” a third said.

Mudong revealed in a comment that the woman “missed her flight.”

The Daily Dot reached out to Mudong via TikTok comment as well as to both Asheville Regional Airport and Allegiant Airlines via email.