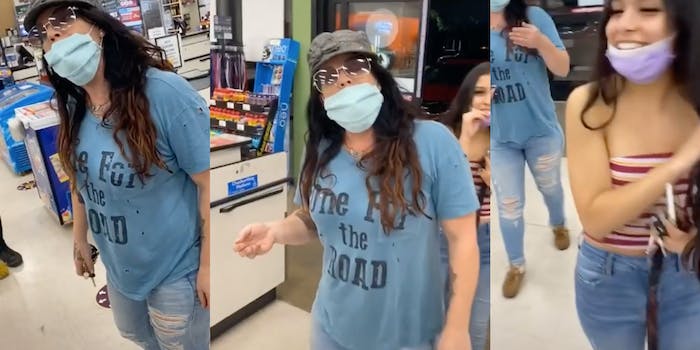 In the video, she throws a tantrum over the clothes the teens are wearing.

“Karens” are really expanding their list of things they feel entitled to throw tantrums over. The latest incident involves a woman who slut-shamed a group of teenage girls over what they were wearing.

This “Karen” was spotted in Chicago, according to IBTimes, and a video has gone viral featuring her verbally attacking the teens as they enter a convenience store.

The video was posted on Instagram account @puruchicago Monday and has since been viewed more than 3,000 times.

It starts with the woman stepping out of her car, looking at the person behind the camera, and saying, “You think you’re funny?”

“I do. Well, you said I’m from the streets,” the teen says, referencing the apparent start of the altercation and laughing at the woman.

“You just keep laughing, ‘cause I’m not laughing, I feel sorry for you,” the woman says as she comes closer to the camera, putting on her face mask.

“You’re mad at what we’re wearing? What the fuck!” the teen says, continuing to laugh.

“I think you should dress appropriately,” says the woman, and she momentarily checks out the teen behind the camera and says, “those are bras.”

“We look better than you!” one of the other teens retorts.

“Excuse me? I’m fucking 40,” the woman says as she enters the store. “I am being like your mom telling you that you should be…”

“But you’re not my mom, bitch!” the teen behind the camera says.

“I’m gonna act like one ‘cause you girls need it,” the woman goes on. “You don’t walk around town in a bra.”

One of the teens asks her, “Why you wanna be in our business? We didn’t bother you, why you gotta brother us?”

The teen behind the camera says they were minding their own business when the woman called out to them from her car so that she could comment on their clothing.

A store employee is then seen approaching the group to ask the woman to calm down.

“I have three little girls growing up looking at you,” the woman says to the teens before the employee screams at her, “Leave!”

The video then cuts to a later altercation between the woman and the employee; his words are inaudible in the video due to the chaotic nature of the conversation. The teenagers are heard thanking him, likely for supporting them.

While the teenagers handled the “Karen” altercation masterfully by just laughing at the sheer ridiculousness of the woman’s entitlement, those on Instagram expressed anger.

“These Karen’s are always been extra like they’re really gonna stop the way people dress might as well try to cancel all the fashion designer brands, Social media supermodels etc. etc.,” wrote one person.