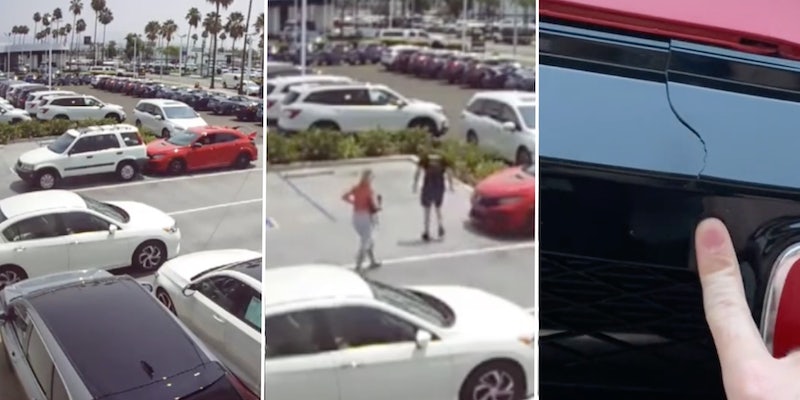 Viewers roasted the Karen for reversing despite having no cars in front of her.

A man was waiting to get his new sports car inspected when a Karen backed into his car while attempting to move into the shade at the Honda dealership lot the two were parked in.

In a now viral TikTok posted Thursday, Jack Bitar, or @bitarbuilt_fk8, shared footage of a Karen backing into his parked 2021 Honda Civic Type R. The video has amassed over 3 million views. It did not appear that there were any cars in front of the Karen’s car, so it is unclear why she decided to reverse the car before driving forward. Bitar wrote in the TikTok that he was parked in a spot designated for the service line.

Bitar says the Karen attempted to “get out of the responsibility” for the collision, but there were witnesses around the dealership who had seen the incident take place.

In a follow up video, Bitar explains the situation further and shows the damage done to his car. He points out a cracked grill, crunched panel, and a dislodged seal at the front of his car. He says he has to replace the entire bumper. He adds that he didn’t have enough reaction time to turn on his car and reverse away before the woman hit him.

He goes on to share that the Karen questioned him about how he knew she caused the accident.

“You felt the impact,” Bitar continued in reference to the Karen. “The car that you were in shook, and I was parked. So clearly, an impact had been created. The service representatives saw it.”

Bitar told the Daily Dot that he still needs to get an appraisal of the damage.

“I’ll be going tomorrow to a body shop to get that appraised,” he said. “Still waiting for all that to pan out before the [lady’s] insurance gives me a damage quote.”

Folks in the comments expressed support for Bitar and roasted the Karen’s driving skills.

“She needs to go back to drivers Ed if she’s just randomly backing up without looking behind her,” one comment read.

“Ohh man I feel [your] pain so sorry this happened man,” another said.

“Why would she back up if there was no one in front of her,” a user wrote.

“Always these type of people who wanna hold everybody but themselves responsible,” one person said of the Karen.

This post has been updated to include a quote from Bitar.

Correction 10:13 am CT Aug. 23: A previous version of this post stated the Karen was trying to leave the dealership. She was trying to move into the shade.