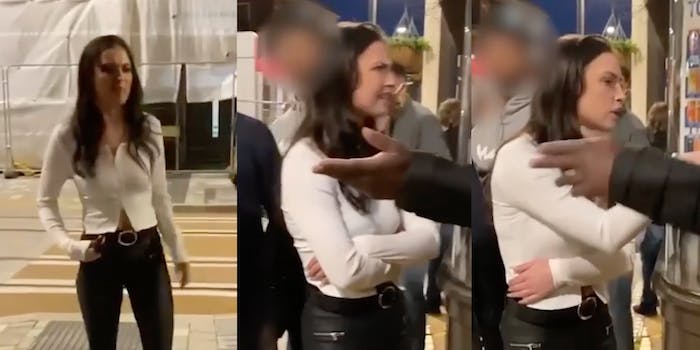 ‘Karen’ calls bouncer the N-word, shoves, and spits at him in shockingly racist outburst outside bar

The woman hasn't yet been identified.

Another problematic so-called “Karen” has gone viral in a video showing her racist tirade after being kicked out of a bar in Birmingham, England, this past weekend.

After she was being removed from an area pub, bouncer Tristan Price later shared screengabs of the exchange to his Facebook page. Price’s post has been shared over 5,000 times.

“I haven’t been doing security for years like some, but in the short time I’ve been doing it I’ve seen and been through pretty much anything there is to see and go through whilst doing the job,” Price wrote. “This however, is something I, or anyone who looks like me shouldn’t have to go through. There was a time I’d go through things like this and brush it under the carpet but them times are over. Share and find out who this is.”

Price’s post only includes screengrabs of the video, and not the video itself. It’s unclear where the video was originally shared. In the video, the woman can be seen spitting at Price and calling him the N-word.

“I have several black co-workers who I love dearly and have even dated black men.

I was seriously drunk out of my head that night and upset because I wanted to get into the lounge when I had left my ID in the car which was parked over a mile away.

I was in my heels and couldn’t get my ID and clearly look over 18 but was still refused access to the bar which is why I was angry but I understand that doesn’t justify my words.”

According to the Sun, the Karen has been barred from the pub for life as a result of her actions as depicted in the video.

A representative of the area pub in question, Weatherspoon’s, told the Sun: “She spat her drink towards the member of door staff and also racially abused him. She also caused issues as she was leaving. This behaviour is completely unaccepatble and the woman is barred for life. We will also be pursuing her for criminal damage and passing on the CCTV and bodycam footage to the police.”

According to the Mirror, the incident has been termed a “racially aggravated harassment offense” by West Midlands police and no charges have yet been filed, as the investigation to the situation is ongoing.

The Daily Dot has reached out to Price.