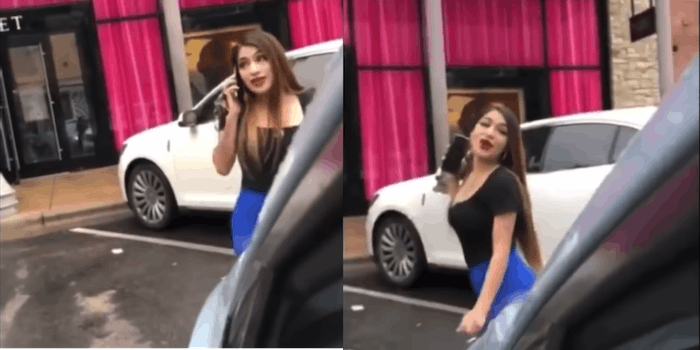 Video: ‘Karen’ tells cops she was hit by car after trying to claim parking spot for boyfriend

The Karen smugly dances throughout the entire incident and calls the driver an 'old b*tch.'

A young woman described online as a Karen is going viral across social media for acting erratically during an encounter in Texas.

Footage posted to TikTok shows the woman blocking a vehicle from accessing a parking spot at an outdoor mall in Austin. She was allegedly trying to save the spot for her boyfriend.

The woman can be heard accusing the female driver of hitting her with her car, which the driver vehemently denies.

The Karen, who claims to be on the phone with the police, smugly dances throughout the entire incident.

“Can you make her move?” the driver says to a parking enforcement official standing nearby.

“I can only do so much…” the man responds.

The Karen then refers to the driver as an “old bitch” while continuing to dance and refusing to move.

The Karen’s boyfriend eventually drives by in his vehicle as she smiles and calls on him to take the parking spot.

The two videos have collectively earned more than 3.6 million views so far and have spurred an influx of comments critical of the Karen’s behavior.

“Why does it seem like this girl invented her personality based off of every bad characteristic she’s seen on TV?” TikTok user Emily Hunt asked.

Numerous comparisons were made to Danielle Bregoli, the girl who went viral for saying “Catch me outside, how about that?” during an episode of Dr. Phil.

Others praised the driver for showcasing such patience in the face of such an arrogant Karen.

“Did you try dragging her by her hair?” user @meghan_elizabeth97 added. “My patience is limited and her little dancey dance would have pushed me past mine.”

Questions still remain as to whether police arrived on scene and who ultimately obtained the parking spot.