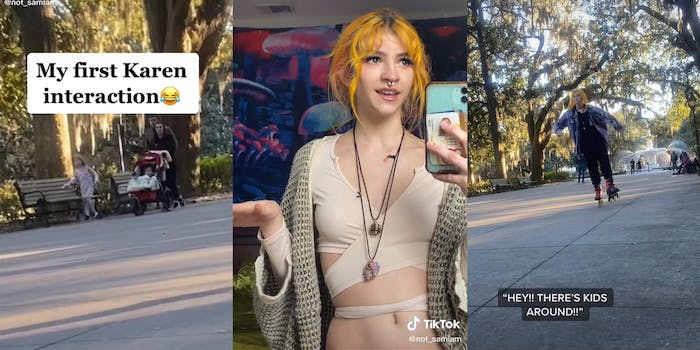 ‘No babe, ur wrong’: TikToker tries to flame ‘Karen’ for getting upset at profane music being played in front of kids at park, sparking debate

'You can also wear headphones, not everyone wants to listen to ur music.'

A TikToker tried to call out “Karen” for getting upset over music being played at the park in a viral TikTok. But the video seemed to backfire, as many viewers are siding with the so-called “Karen.”

The video features Samantha Dederichs (@not_samiam) rollerskating in the park while “Cry Baby” by Megan Thee Stallion featuring DaBaby plays in the background. A woman pushing a stroller, a man, and a small child make their way into the frame as the woman screams, “Hey! There’s kids around!” The child is covering her ears.

Dederichs skates off-screen, but then text appears on-screen that says, “She was initially mad about us skating but then it was about us playing music with curse words.”

“This music around kids?! Shame on you! They’re cursing; there are children,” the woman, who is also filming, shouts at the TikToker. Right before the woman walks away, she says she hopes Dederichs’s parents see the video.

This TikTok has been viewed nearly 13 million times. The comments section was turned off, and Dederichs explained in a follow-up video that it was turned off because she was getting death threats.

In the follow-up video, Dederichs says that she and a group of people were skating. She admits the music was playing a little too loud, which she says she will be more mindful of in the future. Dederichs suggests that if the woman would have calmly asked the group to turn down the music, they would have obliged and that she posted the video solely due to the way the woman handled the situation.

She didn’t turn the comments section off of this video, and many are using the opportunity to comment on the first video. Many are siding with the woman in the video.

“It’s disrespectful to play songs like that around children tho,” one person wrote.

“You can also wear headphones, not everyone wants to listen to ur music,” another said.

The TikToker said in a comment that her headphones fall out when she skates.

Dederichs further defended herself in a comment on the video, saying, “The kid is not going to remember the song but she’ll remember her mom screaming at some roller skaters for life.”

Some, however, believe both parties are at fault. “I still think you both were in the wrong,” one said.

The Daily Dot reached out to Dederichs via email but did not immediately receive a response.