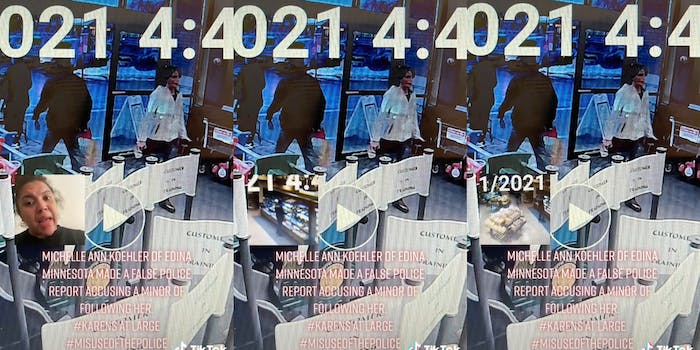 ‘She was stalking him’: Karen files false police report on Black teen for following her around grocery store, viral TikTok alleges (updated)

'She needs to be charged.'

A white woman, dubbed a “Karen” online, allegedly followed a Black teen around a grocery store then filed a police report claiming that he was the one following her, according to a viral TikTok.

According to Babekoa, the incident happened this month in Minnesota. The teenage boy entered the store minding his own business, she said. About two minutes later, the white woman entered the same store.

The boy appeared to be shopping for donuts, and the woman seemed to “sort of circle him” with her hands on her hips, Babekoa said.

Eventually, at about 5pm, the teenager left the store with a bag of items that he purchased. At 5:27pm, the Karen filed a police report.

Babekoa showed a picture of what appeared to be the report.

“I spoke to the [reporting person] and learned that she believed the male appeared to be shadowing her in the store, causing her to be afraid to go out to her car alone,” the alleged police report reads.

“So she called the police and said that this little boy was stalking her, when in the video, it shows she was stalking him,” she said. “And I would like to have that we have the whole store’s footage, and at no point did this boy ever follow her.”

The Daily Dot was unable to obtain this store footage.

This month, Edina police has offered a $5,000 reward for further information on four teens involved in an area carjacking, per WCCO. It’s apparently made residents uneasy, as many gathered this month for a meeting with Edina officials to voice concerns about crime, Fox 9 reported. Edina Mayor Jim Hovland this month in an email to residents said that Edina was “under attack from mobile criminals,” per WCCO.

In an email to the Daily Dot, the communications director for the Medina Police Department clarified that the woman did not file a police report, but called police to report the boy as a potential carjacking suspect. The police wrote a report based on her call but later determined that he was not the suspect.

Babekoa went on to say that this type of behavior has led to the wrongful accusations of countless Black people.

“You owe this family an apology,” Babekoa said, addressing the Karen. “This child deserves justice for what you’ve done.”

Viewers agreed with the TikToker, saying that the Karen needs to be held accountable otherwise she’ll do the same thing again in the future. Some even said she needs to be charged for filing a wrongful report.

“She needs to be charged and this should go on her record, reporting false crimes is a danger to society and everyone needs to be protected from her,” one user commented on the video.

Another user said, “If she’s not held accountable she’s gonna do (it) again.”

One viewer asked, “can he sue for pain and suffering, fear of retaliation for a crime he did not commit. she needs to understand what she did.”

TikTok user @babekoa did not respond to the Daily Dot’s request for comment.

This post has been updated with a statement from the police department.