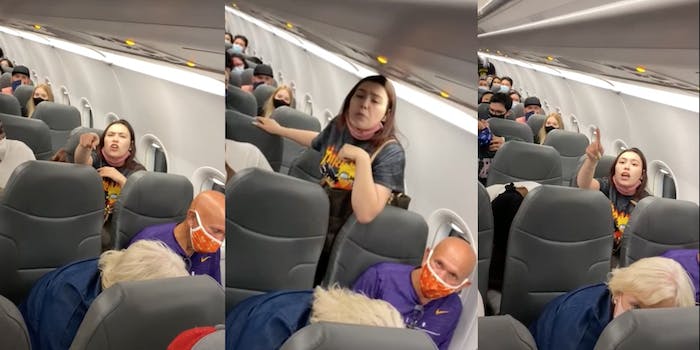 ‘Baby, please stop’: ‘Karen’s’ embarrassed fiancé begs her to stop as she freaks out on plane

The entire plane, at one point, bursts out laughing at the woman.

Yet another Karen is making waves online after being filmed having a meltdown while on an airplane.

Video posted to the popular r/PublicFreakout subreddit shows the woman causing a scene after apparently losing her glasses.

The woman can be heard demanding that other passengers help her find her glasses, even as the man sitting next to her warns that her behavior has resulted in the police being called.

During her rant, the Karen looks up and becomes outraged even further after realizing she is being filmed.

“Are you recording?” the woman says. “That’s illegal.”

That’s when a man off-camera, who identifies himself as the Karen’s fiancé, begs her to stop.

“I’ll stop when you stop,” the man filming responds.

The Karen shoots back by accusing the man with the camera of being “disrespectful.” The entire plane, clearly tired of the woman’s tirade, bursts out laughing as a result.

“We’ve been listening to your crap for hours,” the man says.

Losing the argument, the Karen then resorts to making personal attacks against the man’s appearance.

“That’s disrespectful with his bald ass,” she says. “You probably don’t get your d*ck sucked motherfucker.”

Even as passengers on the plane continue to laugh, the Karen escalates the situation further.

Like many of the passengers on the plane, Reddit users were quick to become annoyed with the Karen’s actions.

“Geez I’ve watched so many Karen videos that I can hear their annoying, entitled voices with the video on mute,” u/GreenBay7115 said.

It remains unclear whether law enforcement became involved at any point during the incident.