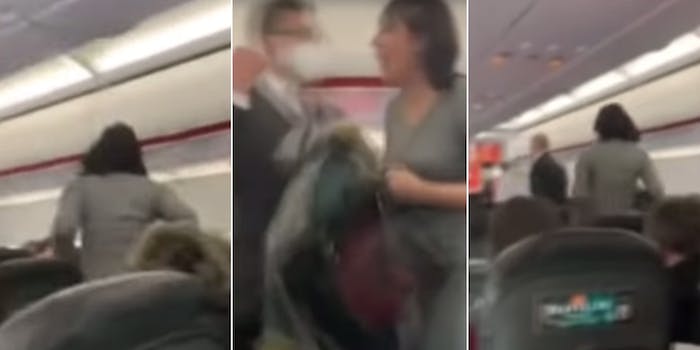 Maskless ‘Karen’ coughs on passengers, screams ‘everybody dies’ as she’s kicked off plane

'Every-f*cking-body dies, if it’s corona or not.'

A newly surfaced video shows a maskless “Karen” coughing on airplane passengers as she’s being kicked off the flight, seemingly after creating a scene over wearing masks.

The video, uploaded to YouTube by user Print Presstrend, shows the woman picking up her bag from her seat while screaming, “Everybody dies! You know that? Every-fucking-body dies, if it’s corona[virus] or not.”

Karen then coughs in passengers’ faces across multiple rows while walking down the aisle, as a crew member directs her off the plane.

A video of the incident shot from a different angle shows the woman storming off the plane as a crew member points her toward the door and yells, “Go!”

“Off now, get off now,” one flight attendant tells Karen, to which she responds with what sounds like, “Fuck off bastard, I hope you die.”

The incident took place on an EasyJet flight between Northern Ireland and Scotland on Sunday, according to Newsweek.

EasyJet has a mask policy that requires all passengers to bring their own masks and wear them during the whole flight, except for when they’re eating or drinking.

“Passengers receive clear communications before they travel and via announcements onboard to ensure they are aware of this requirement for the health and safety of everyone onboard,” EasyJet told Newsweek in a statement. “We will not tolerate disruptive behavior towards other passengers and crew.”

Belfast International Airport also confirmed in a statement that the flight crew removed the woman because of her refusal to follow coronavirus safety guidelines. Karen was arrested following her removal from the plane, and the incident is being investigated.

Correction 12:30pm CT, Oct. 28: An earlier version of this story misstated the country of origin for the flight; it was departing from a city in Northern Ireland.