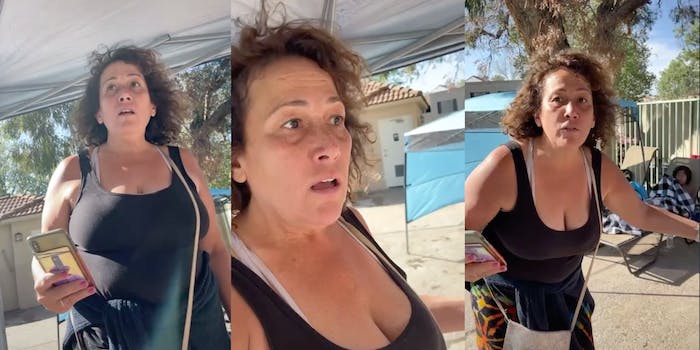 'You're not allowed to have this. It's COVID.'

A maskless, body-shaming Karen made it her goal to ruin a family’s party over the weekend after she saw them enjoying themselves at an apartment pool.

TikToker @mamichapina86 shared a series of videos documenting Karen’s attempts to break up her family’s get-together. Karen cites COVID-19 safety protocol as her reason, despite being maskless herself, and despite the fact that everybody at the weekend hangout claimed to live in the same house.

The first TikTok, which has racked up more than 2 million views in just over a day, shows the altercation itself. The unmasked Karen storms over to the group, demanding that they “shut it down.”

“You’re not allowed to have this. It’s COVID,” Karen says, gesticulating at the group. From behind the camera, @mamichapina86 informs Karen that everyone gathered is “from the same house.” Karen responds by shoving a camera into her face and threatening to call the police. She then begins to complain about the group serving food, only to be shut down by @mamichapina86.

“You’re coming over here without a mask on, and we all live in the same house,” she says, momentarily silencing Karen. She’s back at it moments later, however, telling @mamichapina86, “I don’t give a fuck how many people live in your house.”

Karen accuses the group of breaking several other rules, including cooking where no food is allowed, but @mamichapina86 is ready for her. She informs Karen that maintenance staff already saw their setup and had no complaints.

Karen begins to leave the area, but not before calling @mamichapina86 a “fat fucker.”

Her insult falls flat, however, when @mamichapina86 responds, “I’ll be fat all day, but I’ll still look better than your ass.”

In a follow-up video, @mamichapina86 explains that she and her family were enjoying the pool at a relative’s home. They were trying to give the kids one last get-together before school started again.

Then she noticed a woman taking photos of them from a nearby car. @mamichapina86 pointed the woman out to her family, but was reassured that management had approved their gathering. Not one to be ignored, Karen soon parked her car and approached the pool party. The viral confrontation ensued.

After Karen left, she apparently circled the pool several times until a member of the building’s staff came out to inform her that @mamichapina86’s family wasn’t in trouble. It turns out Karen already had a reputation among the staff there, and they advised the family to simply ignore her.

The final installment in @mamichapina86’s four-part series shows several angles of Karen’s car, which the family captured as it repeatedly circled the pool area.

In the comments of all four videos, people speculated about the real reason for Karen interrupting the family gathering. Many suspected racism.

“I bet it’s cause she heard Mexican music,” one user wrote.

Others pointed out that @mamichapina86 claimed her entire family was from the same household, only to clarify later that they were “at a relative’s house.” Some people empathized with Karen if the family was, in fact, hosting a large gathering outside of their household.

Everyone else assumed Karen was just angry because “she didn’t have carne asada.”