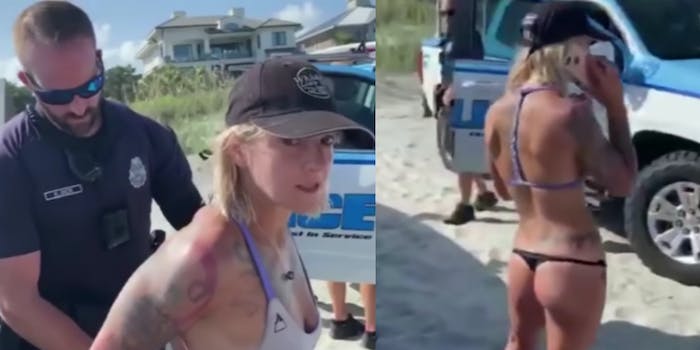 Someone complained about Sam Panda, a well-known acrobat.

A woman was detained for wearing a thong bikini at a beach. An officer is heard saying the woman has her “butt hanging out” in a viral video posted to social media.

The woman has been identified by the Sun U.S. as Sam Panda, a well-known acrobat from Pittsburgh.

In a video, two officers are seen handcuffing and escorting Panda to the patrol car on Myrtle Beach in South Carolina. The video was posted to YouTube and TikTok, where people are calling them “Karen cops.”

Panda reportedly shared the video to Facebook, but her social media accounts were not available on Tuesday afternoon.

The nearly five-minute-long video starts with Panda’s friend, who is recording, asking, “So why is it illegal to wear this to the beach?”

“It’s literally what I wear to the beach every day,” Panda says.

One officer says he’ll show them why Panda is being detained.

“Did someone complain?” the friend asks, but the officer doesn’t answer.

The group then approach another officer, who opens up a binder containing what appear to be the rules. The officer reads out a rule saying nudity is prohibited on the beach.

“I am not nude!” Panda exclaims.

“You’re in a thong,” one officer says.

Both Panda and her friend try to explain that a “thong is not nude.”

“An anus and a vagina are nudity,” her friend says. “A thong is not nudity.”

The officer says something inaudible, and Panda’s friend responds, “OK. Alright. Having your nipples exposed is not against the law, as long as it’s not in a sexually explicit manner?”

“Can you please let go of me?” Panda says to the officer holding Panda’s hands behind her back.

“No you’re in handcuffs,” he responds.

“You put me in handcuffs for being in a thong,” she says.

The friend continues explaining why wearing a thong isn’t nudity, saying, “This is not considered nudity. There is clothing covering her private parts.”

The officer tries to argue that Panda’s buttocks being exposed counts as nudity. Her friend points out that other women on the beach are wearing similar bikinis.

The video then cuts off before reappearing to show Panda walking up to an officer sitting in a police car.

When she tries to tell the officer that she isn’t nude, he responds by saying, “It’s the thong.”

He goes on to explain that her “butt is hanging out.”

“In her case, she’s out here with um.. a wet top,” he continues, stammering as he seemingly tries to avoid saying “nipples.”

“I bought this at a store,” she later says. “So, how can you have stores that sell thong bikinis, and then not allow us to wear them?”

The police reportedly arrived after someone complained that Panda and her friends were “dancing and soliciting videos on the beach.”

“‘Thong’ style bathing suits” are prohibited on the beach, as per a 2019 ordinance, according to WBTW News 13.