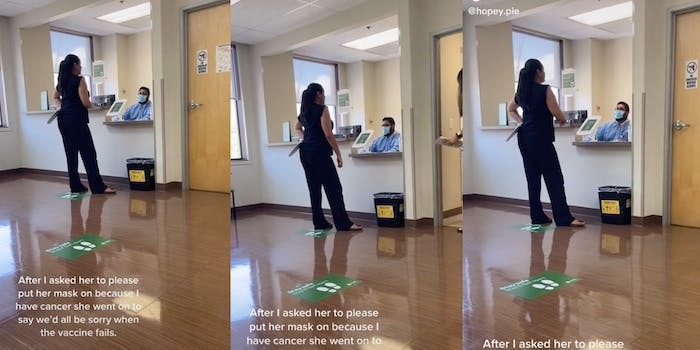 Video: Vaping Karen complains to hospital staff after cancer patient asks her to wear a mask

She blows the smoke in the worker's face while talking to him.

A viral video shows a woman vaping and speaking aggressively to an employee at a California Quest Diagnostics location allegedly after a cancer patient asked her to wear a mask.

In the video, the woman is blowing her vape smoke in the clinician’s face and demands to speak with someone else. When he asks her to refrain from smoking and tells her that she is being rude, she says her vaping is intended to “control (her) autoimmune disorder.”

The video, posted to TikTok, has been viewed over 450,000 times. Quest Diagnostics states masks are required inside its locations.

The poster, @hopey.pie, wrote in the comments section of the video that she is a metastatic cancer patient who was at the Pasadena location of Quest Diagnostics for a blood test when the maskless woman arrived without an appointment. The TikToker implied the woman also held anti-vax views because she allegedly said, “We’d all be sorry when the vaccine fails.”

“She yelled at me when I told her I was a cancer patient and asked her to put her mask on,” @hopey.pie wrote. “The poor guy was the only one working at the time. He ended up escorting me out the back because she was on the phone with corporate complaining about me.”

One commenter claimed that the clinician in the video is her husband and shared supportive words for the TikToker. “Great job keeping your cool honey,” she said.

“Trust me when I say, I was definitely heated when he came home telling me what happened but he did great handling himself,” she added.

Viewers had similar words of support for the TikToker and the clinician.

Others were caught up on the woman’s apparent anti-vax views and the fact she was vaping in the medical office. “She is the poster child of ‘I don’t know what’s in the vaccine’ then inhales literal chemicals,” one said.

“Don’t believe in science but goes to the hospital. the irony. the entitlement. the privilege. it reeks,” another said.

The Daily Dot has reached out to @hopey.pie and Quest Diagnostics.