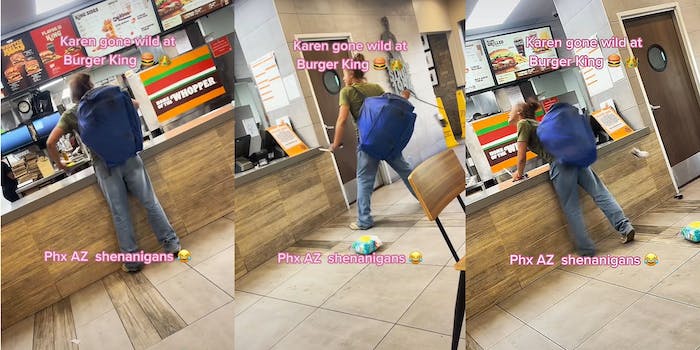 ‘All over a whopper’: A Karen harassed Burger King workers for not making her food fast enough

'That’s no Karen....that’s something else entirely.'

A TikToker’s video capturing the freakout of a Karen who allegedly harassed Burger King employees for taking too long to prepare her order has gone viral on the platform.

The video shows a woman who became agitated as she waits for her order at Burger King. As she shouts at employees, she begins pushing point-of-sale devices off the counter and throws a card reader at employees.

“You’re fucking with me all the fucking time,” the woman says to the employees. “Eat my shit, bitch.”

The original poster, @keepingupw.mia, commented that she had to end the video because she “went off” on the angry woman.

“I had to end it [because] I got up and went off on her [because] I had my kids and that’s bogus talking to workers like that she got arrested and smiled in her mugshot,” she wrote.

In a follow-up video, @keepingupw.mia includes screengrabs of the woman’s mugshots, claiming that she was arrested later that day for assault, and then again nearly a month later for assaulting a public officer.

@keepingupw.mia Reply to @maarceelaaa this is the only update lol that’s it that’s all ! #fyp #az ♬ Inside Their Head – TT remix

Commenters empathized with the employees working behind the counter while this was happening.

“They don’t get paid enough to deal with this,” one commenter wrote.

“This is why most places judge homeless for safety reason,” another commenter wrote. “This is just sad for employees.”

“I would’ve made her leave and called the police,” a commenter wrote. “You don’t have to serve people like this.”

The Daily Dot has reached out to @keepingupw.mia via Instagram DM and Burger King via press email for comment on this video.