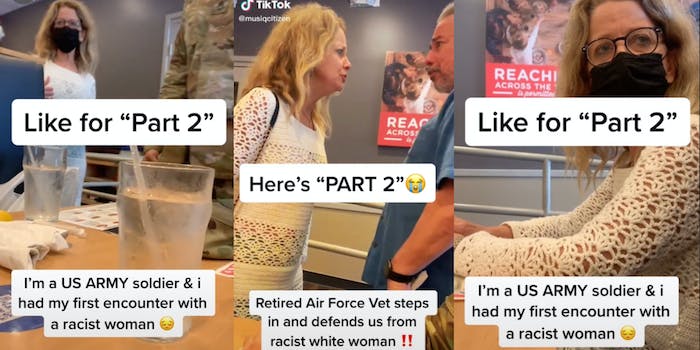 ‘You guys all tip like sh*tbags’: Karen harasses Black soldier at IHOP in viral TikTok video

At one point in the video, she wants to fight a retired Air Force veteran who intervenes on the soldiers' behalf.

A woman was filmed harassing a group of soldiers at a Virginia IHOP and eventually trying to block one of them from leaving the restaurant.

The video starts with the woman walking up to the group of fully uniformed soldiers and telling them, “Just so you know, I came back in to give her the rest of the cash from my wallet because you guys all tip like shitbags.”

“Ma’am, please walk away. Please,” a Black soldier, Joé Jeffers Jr., can be heard asking the woman from behind the camera as he is seated at a booth.

Instead of walking away, the woman sits down next to Jeffers, trapping him in the booth. “No, no no, no. Ma’am, can you please leave?” Jeffers asks her.

“Because?” she asks twice.

“We’re leaving. Can you excuse (me)? I’m trying to get out,” Jeffers says.

She picks up his cap from the table.

A man, later identified by the TikToker as a retired Air Force veteran, tries to intervene on the soldiers’ behalf. He takes the cap from the woman and gives it back to its owner after telling the woman that she’s “making a problem.” He asks if there’s “a cop” in the restaurant because “they need to get her out of here.”

The woman demands to know if he’s the owner of the location and appears to put cash into the placemat menu as a tip for the soldiers’ server.

As the woman is unwilling to move, Jeffers climbs over the booth to leave the restaurant.

The woman’s remarks become increasingly unhinged as she begins accusing the soldiers of being part of various different movements. “Are you the thin blue line? I get confused. Are you BLM? Are you antifa?” she questions.

At one point, as seen in “part 2,” the woman shows interest in fighting the veteran, telling him that she will “f*cking drop” him and repeatedly asking him: “You wanna go?” She throws her glasses down on the table as she gets ready to fight.

“I’m a US ARMY soldier & i had my first encounter with a racist woman,” Jeffers wrote in the caption of the first video, including the hashtags #AllLivesMatter #SayNoToRacism #BLM.

Many are lauding the veteran who intervened and expressing how they wouldn’t have shown the same restraint as Jeffers did. “Huge respect to the guy who came over and helped,” one said.

“The problem is we not putting hands on ppl like this,” another wrote.

“Idk how she can’t be embarrassed acting like that in the middle o a restaurant,” a third commented.

In Jeffers’ latest video, he thanks TikTokers for their “concerns” and “words of encouragement.”

“The situation is being handled,” he reveals. “I prayed about it. I let it go mentally. It’s out of my hands. My higher command has control of it now, so it’s being investigated.”

He also forgives the woman in the video. “Whoever she is, if you’re seeing this ma’am, it’s OK. I forgive you. Let’s just move on from this. Say no to racism,” he concludes.