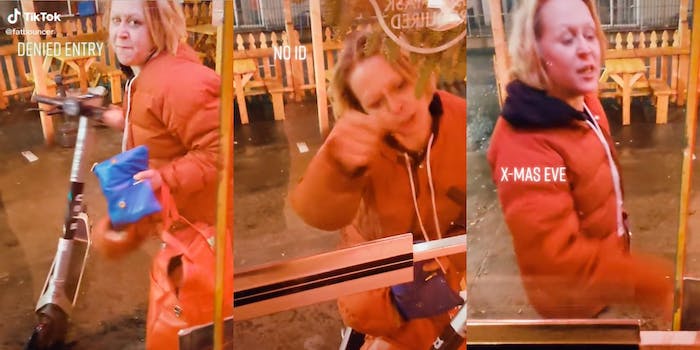 ‘The sh*t we put up with’: Karen throws scooter at bar door, threatens bouncer after being turned away in viral TikTok

'I'm so tired of these people.'

A viral TikTok shows a white woman, dubbed a Karen, losing it outside a bar after she was turned away for not having an ID or a face mask.

In the footage, the Karen can be seen shouting unintelligibly as she drags a Bird scooter up to the bar entrance, which was closed. She appears to try to lift the scooter to swing it at the door but ends up ramming the object against it instead.

TikTok user @fatbouncer posted the video, captioning it, “The shit we put up with.” The footage garnered almost 462,000 views on TikTok as of Sunday. The video was posted 3 days ago but appears to have taken place on Christmas Eve.

After using the scooter, the Karen banged her fist against the door a few times while still shouting. Then she paced around in a circle before grabbing an unidentified object and breaking it against the door.

Someone, presumably the TikToker, can be heard asking from inside the bar, “Why don’t I just mace her?”

Finally, the Karen yanked a Christmas wreath off the bar door and stalked away, shouting over her shoulder as she went. According to the TikToker, police “made contact” with the Karen but did not give her a citation.

The majority of viewers seemed to sympathize with the TikToker, voicing their concern by commenting on his video.

“I’m so tired of these people,” user @sarabeempls commented.

“Why are people so mad these days… Scary,” user @welshgirl365 wrote.

Another user said, “If I am ever on a jury where someone is on trial for punching one of these crazy people… verdict – non guilty, completely justified.”

In a second video, the TikToker shared additional footage of the Karen prior to her attacking the bar door.

“I’m gonna kill your fucking dick. I’m gonna cut that motherfucker off,” the Karen yelled, gesturing to the bouncer. “I’m gonna cut your dick off, bitch.”