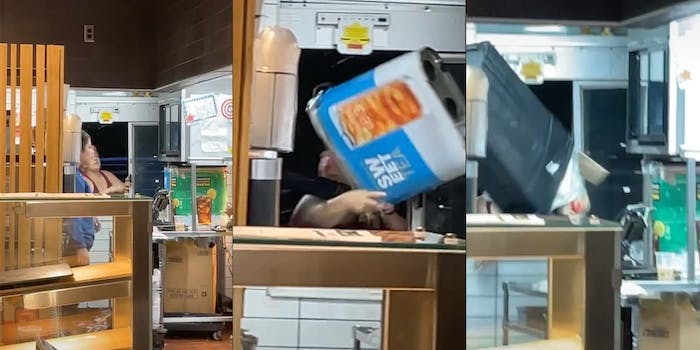 ‘Why literally no one wants to work in the food industry anymore’: Karen throws iced tea dispenser at McDonald’s workers in drive-thru

'I feel so bad for fast-food workers who have to deal with people like that.'

In a TikTok video posted on July 22, a woman is seen yelling and throwing trash, a garbage can, and an iced tea dispenser at McDonald’s workers via a drive-thru window.

The video is set to TikTok’s “Oh No” audio, and the poster, @camanese, captioned it with the hashtags #karenoutofcontrol and #outrage, among others.

In a comment on the video, @camanese said that they don’t know what caused the woman’s outburst and that they just “heard yelling and started recording.”

The TikToker also claimed that the police were called to the incident. According to @camanese, the police “got her plate number” and watched the video.

A TikTok user who claims to be one of the workers in the video commented on it as well. “I was hoping one of you would see this. I’m so incredibly sorry about this happening,” the TikToker said in response.

A host of other comments likewise expressed sympathy and frustration for the McDonald’s workers.

“This is why literally no one wants to work in the food industry anymore,” wrote @teabby.

“I feel so bad for fast food workers who have to deal with people like that,” a third added.

The Daily Dot has reached out to @camanese and McDonald’s.