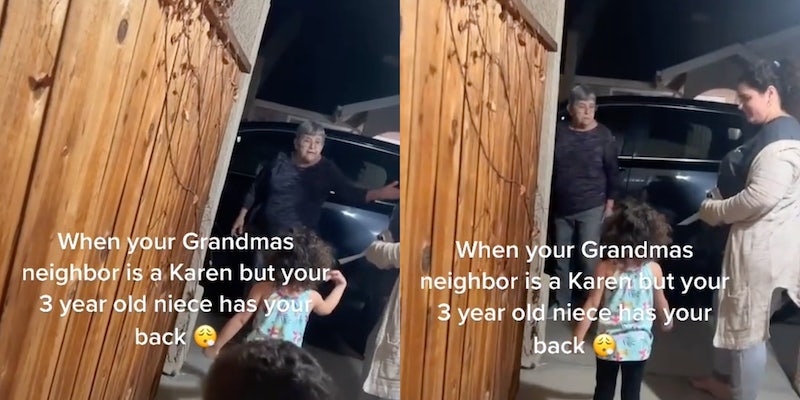 ‘She was really fighting a 3 year old’: Woman’s young niece defends her against ‘Karen’ neighbor in viral TikTok

'She can do whatever she wants because she's my auntie.'

Viral TikTok footage shows an elderly woman, dubbed a “Karen,” arguing with a 3-year-old girl who stood up for her aunt.

The aunt, TikTok user @marah_alkhandak, shared footage of the exchange, which garnered 1.3 million views as of Sunday.

“When your Grandmas neighbor is a Karen but your 3 year old niece has your back,” the TikToker wrote in the video’s on-screen caption.

The video starts in the middle of an argument between the Karen and the aunt outside as the niece and another child watch from the home’s doorway.

Then the niece steps forward, loudly saying, “Let me talk to her.” Meanwhile, the Karen tells the aunt, “Nobody is supposed to park there.”

“This is my auntie,” the niece says to the Karen while gesturing dramatically to her aunt.

“I don’t care who it is,” the Karen snapped to the child. “There’s no parking in front of these apartments.”

The child wasn’t fazed though and told the Karen that her aunt can do whatever she wants—”because she’s my auntie.”

“Well that’s just tough, lady,” the Karen told the child. She appeared to walk away after that.

The aunt wrote in a comment on the video that she hadn’t parked anywhere near the Karen’s apartment. She said she had parked in the fire lane because her grandma had fainted.

Viewers applauded the little girl for standing up to the Karen and condemned the Karen for arguing with a child.

“Man the old lady arguing with a kid,” one viewer commented.

“The way she was talking back to her .. she was really fighting a 3 year old,” another said.

Someone else wrote, “She better leave that baby alone….”

Some viewers commented the niece’s remarks.

“SHE CAN DO WHATEVER SHE WANT BECAUSE SHE IS MY AUNTY!!!!” one viewer commented in all caps.

“little girl said….. ‘let me talk to you'” another wrote with laughing and skull emojis.