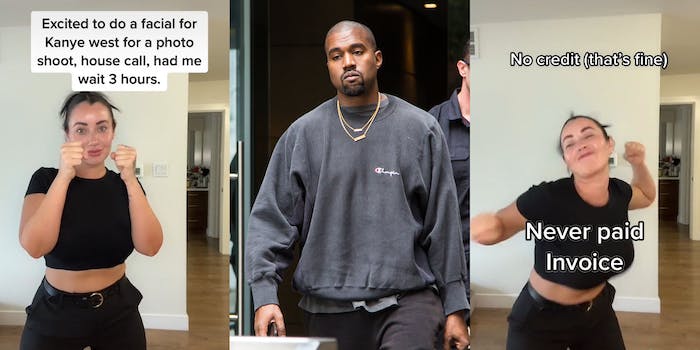 ‘Paid in clout’: A celebrity skincare expert alleges Kanye West never paid her for a facial

'Why do rich people do this?'

People have highlighted the irony of rich folks who either end up getting free stuff or demand that they’re given goods and services for free. While you can’t believe everything you read on the internet, there are just too many examples of this phenomenon fluttering around on the web to ignore.

This is probably why a skin specialist’s post about giving a facial to Kanye West and not getting paid by the musician and clothing mogul is going viral on TikTok.

Sarah Ford has built up a sizable client base and online following for her skincare expertise. Her Instagram is packed with before and after photos of clients rocking marked improvements in their complexions. She also posts other skincare-related content, like tips on engaging in dermal routines that work in tandem with exercise plans.

It seems that Kanye West’s team took interest in her work, as Sarah claims his assistant followed her on Instagram and reached out to book a facial for West before a photoshoot.

In the now-viral clip, she writes that she was “excited to do a facial for Kanye West”, but that she had to wait for three hours, received no credit, and that West’s team “never paid invoice.”

Beauty professionals filled the comments section claiming that they’ve been put in similar situations by wealthy and well-known clients of their own.

One make-up artist said, “[I did] hair and makeup for the housewives (won’t say which) and was paid in clout and one didn’t even let me take her pic.”

Another shared, “I’ve had similar thing happen. It’s so funny how these billionaires, millionaires, and their assistants can’t pay things but can book you right.”

Some commenters suggested that Sarah should reach out to Kanye’s assistants to remind them to pay the invoice, as many celebrities with packed schedules and commitments hire personal assistants to take care of their day-to-day activities. However, Sarah said that she tried that to no avail.

Sarah followed up in the comments section by stating that her post was “a joke” and that she didn’t really care that Kanye’s team didn’t pay her invoice.

She commented, “This is a joke and yes his team reached out lol and yea they never paid either. Kanye is a nice guy.”

Others mentioned that Ye is “notorious for not paying people”.

One commenter said, “Yep he’s [known] for this. His label is also poor at paying invoices.”

This isn’t the first time Kanye West has caught heat for not paying for a service. West was accused of not paying for beats by Scottish DJ and producer Hudson Mohawke in 2016 and reportedly sued for unpaid wages on multiple occasions.

The Daily Dot has reached out to Sarah Ford for comment on this story.