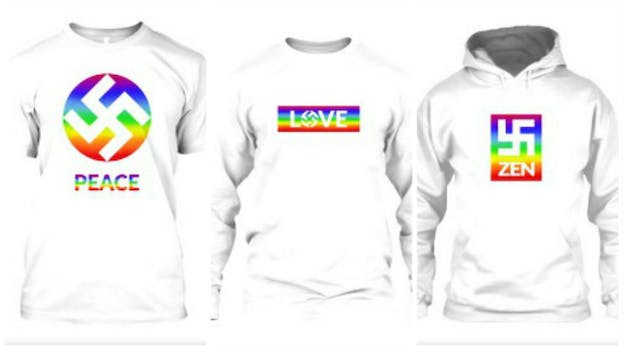 K A Designs, though, is not backing down.

A clothing company is apparently so interested in pushing the boundaries of fashion, it’s tried to make the swastika a “symbol of love and peace.” That declaration, though, has been met with massive resistance online.

K A Designs tried to push the narrative that it was reclaiming the swastika by explaining that it’s a 5,000-year-old symbol that was once associated with peace, love, and life until the Nazis turned it into a marker of hate.

Then, it introduced a rainbow-colored swastika that could be printed on shirts, promoting love, peace, zen, and freedom.

The backlash was almost immediate.

“I am outraged and shocked that any company would seek to profit from selling such reprehensible items,” Dr. Dvir Abramovich, chairman of the Anti-Defamation Commission in Australia, told PinkNews. “The swastika does not represent the LGBTI community, whose members were the victims of Hitler’s evil regime. And no, it cannot be rebranded as a symbol of peace. KA’s naïve, and in many ways, selfish attitude shows a staggering lack of concern for the feelings of those who survived the Holocaust and those who lost relatives to the monstrous deeds of the Third Reich.”

As of Monday morning, Teespring had taken the T-shirts offline. K A Designs did not immediately respond to a Daily Dot request for comment.

But K A Designs—which describes itself as “your source for quality vintage style tees with funny sayings and original designs for guys and girls”—appears not to be backing down from the controversy.