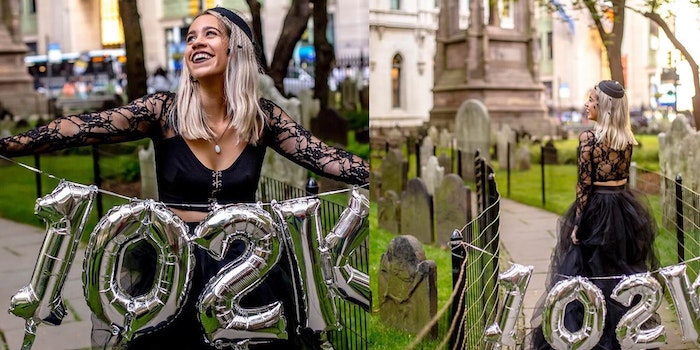 Mandy Velez wanted to pay off her loans by 30.

A New York journalist recently celebrated the end of debt after she “killed” $102,000 worth of student loans with months of hustling and not eating brunch.

Mandy Velez, a 28-year-old reporter for the Daily Beast, posted a four-part series on her Instagram last week about her newfound “SWEET FREEDOM” and funeral photo shoot at the historic Trinity Church in Manhattan.

“It is with immense pleasure that I announce the death of my student loans,” Velez wrote in the post. “On August 2, 2019, after 6 years, I finally killed them. It was a slow death but was worth every bit of the fight.”

She went on to detail the sacrifices she made in the process, including working three jobs and substituting friend brunches and date nights with walks in the park. She said even though she’d been paying $1,000 per month, more than the minimum, last year she committed to being debt-free by the age of 30.

“Maybe it was feeling like my life was on hold, but I just remember thinking I was DONE,” she wrote. “I didn’t want to owe anyone anything more. I wanted to start saving for my future. A house. Kids. A life..”

She reached her goal two years sooner. She says she managed to do it through a hustle that sounds like a movie montage.

“I walked dogs until my feet literally bled. In the cold. In the rain. In the heat. Nothing was beneath me,” she wrote. “I babysat. I cat sat. I stayed up for 24 hours straight to make a few hundred bucks as a TV extra on shows they filmed overnight. I cut my food budget down to merely salad, eggs, chicken and rice.”

Velez also acknowledged that as a “single, childless, able-bodied woman,” she had certain privileges not afforded to everyone with student debt.

“Not everyone can do this. Maybe due to lack of jobs, ability or other compounding responsibilities, because truth be told, it’s a rigged game,” she wrote in a follow-up post. “But here’s the thing, people’s futures should never be a game. I celebrate my freedom but I don’t feel we student borrowers deserve the hardship that comes with these loans: high interest rates, sketchy providers, yearly tuition hikes, the list goes on.”

Her Instagram is full of love and support from strangers.

“Congratulations it’s a dream accomplished,” one user wrote. “Now start making plans to have some fun with fam and friends, it’s well deserved.”

In a follow-up post, Velez wrote about the freedom she feels now: “After six long years, it’s time to celebrate. I have my life back. I changed my life. I changed my future family’s life. I ended the cycle of literally ‘paying’ simply for wanting a better future. For being a ‘have not.’ Well not anymore. It’s all mine now. I’m free.”