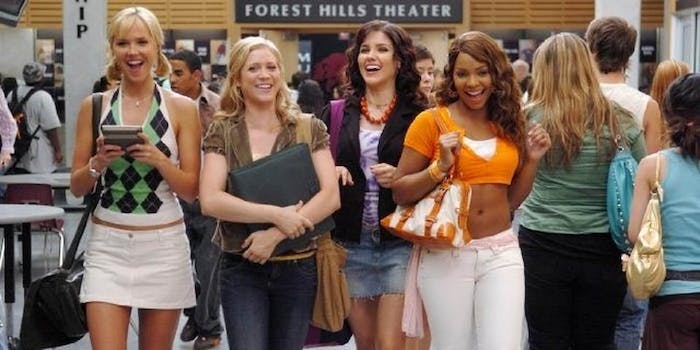 Tyler Kost's attorneys say a Facebook message thread proves that Kost was framed. But the story is more complicated than that.

A young man named Tyler Kost has been in prison for nearly a year now awaiting trial on charges of sexual abuse. Now, his defense team claims Kost is in jail as the result of an elaborate conspiracy hatched by his ex-girlfriends that was inspired by the 2006 comedy John Tucker Must Die—and he has the Facebook messages to prove it.

Kost, 19, appeared in court on Monday and faces 30 charges on three indictments from sexual abuse to child molestation. His lawyers argue that the charges stem from accusations made by a group of 13 girls, most of whom attended Poston Butte High School in San Tan Valley, Arizona with Kost.

Considering most of Kost’s accusers are between the ages of 13 and 17 years old, the evidence against him sounds pretty damning. But Kost’s attorney claims he has evidence from the girls’ Facebook and Instagram accounts that will exonerate his client. His lawyers described to the court a transcript of Facebook chats between some of the girls that shows evidence of a conspiracy. Via KSAZ:

In their motion, the defense team included some of the group Facebook messages obtained by Pinal County Sheriff’s Office detectives between the alleged victims one week before the allegations were reported. Saying; “Tyler needs to be taught a lesson” and “We should sacrifice him to Satan.”

Another exchange read; “Let’s (expletive) with his mind and car” and “Exactly, I’m down.”, along with “Yes, I already know this is going to be so much fun!”

The young women also reportedly made a plan to rent John Tucker Must Die to help “plan” to get Kost arrested. (For those unfamiliar with the plot of the 2006 film, it’s about a group of four high school girls who find out they’re all dating the same guy and conspire to make his life a living hell.)

The conversation allegedly happened on Feb. 20, 2014. Within a month, Kost’s lawyers say two of the girls came forward.

“A group of girls actually conspired against him,” defense attorney Christine Whalin told reporters outside the Pinal County Courthouse on Monday. “They conspired to put Tyler in jail. They succeeded. Tyler’s been sitting in jail for almost a year based on the lies of these girls.”

That said, those involved in the case believe the defense team’s strategy is a creative form of victim-blaming. Michelle Holmes, who is not named as a plaintiff in the case but did participate in the Facebook message threads, told azcentral.com: “We were just a bunch of pissed off teenage girls. We were just ranting and venting and getting it off our chest.”

She added: “It’s been almost three years since it happened and they’re [Kost’s lawyers] going to have the nerve to call me a liar? What the hell is wrong with you?”

A spokesman for the Pinal County Sheriff’s Office said that in one case, Kost threatened a victim and told her to kill herself. Another reports that he raped and impregnated her after the Poston Butte homecoming dance.

Although the defense says it only has evidence linking 3 of the 13 total accusers to the alleged conspiracy, Redditors are already using the case as an excuse to share their own theories about how all women who accuse men of rape are lying, money-grubbing whores.

“You individuals [meaning women, I guess?] not only ruin the life of the male, but also take away credibility from females who actually were raped. It’s fucked up,” one commenter wrote.

Another chimed in: “Totally ruthless move. Bunch of immature broads stewing a revenge plot over some guy that wasn’t interested in them.”

The judge in the case is taking the social media evidence under advisement while the defense tries to collect all the social media history from all 13 girls. Facebook will only provide those records to law enforcement, and the defense is asking the prosecution, which already has a mind-boggling 98,000 pages of social media records from Kost’s alleged victims, to help out.