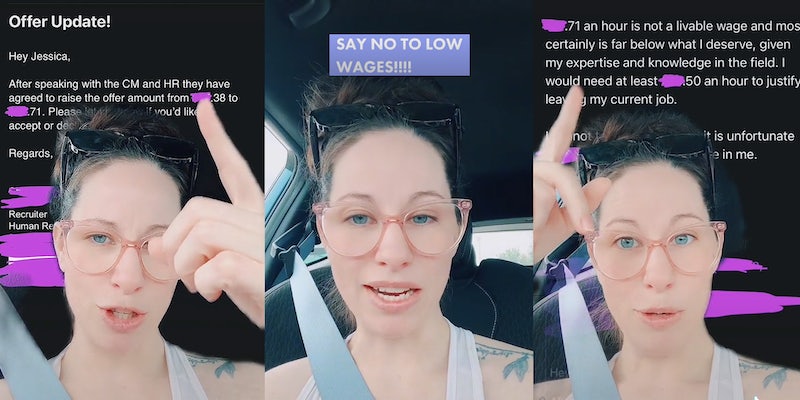 ‘STOP ACCEPTING LOW OFFERS JUST TO BE EMPLOYED!’: Worker says job increased rate by only 33 cents after she asked for a higher offer

'The last time .33/hr made any meaningful difference was the '90s.'

A worker on TikTok is urging her followers to stop accepting low-paying jobs after sharing her own unsatisfactory job offer.

The TikToker, named Jess (@jessthewhooty), shared a now-viral video in which she says she recently declined a job offer because the company didn’t offer her high enough pay.

“STOP ACCEPTING LOW OFFERS JUST TO BE EMPLOYED!” Jess wrote in the caption. “They have to pay more if we all say NO to low wages!”

@jessthewhooty STOP ACCEPTING LOW OFFERS JUST TO BE EMPLOYED! They have to pay more if we all say NO to low wages! #paymemore #livablewages #communism #socialism #sayno #lowwages ♬ original sound – JessTheWhooty

In the video, Jess says she recently received an offer letter for a job she was interviewing for, but the pay offer was “garbage.” She told the company that the offer did not reflect the current economic situation or her experience in the field. The TikToker did not mention the field or the exact company.

After she asked the company for a higher rate, they raised their offer by 33 cents, Jess says.

“So after getting my relevant work history and realizing I’ve been doing this for 10 years and I’m highly fucking qualified, they were like ‘yeah, we’ll just send her a 33 cent difference. That’ll do it,'” she continues.

The gist of her response to the company was “respectfully, fuck right off and shove your offer right up your ass,” the TikToker says.

In the video, she shares a screenshot of her email response to the company. She tells the company in the email that the offer is not a livable wage and would not justify her leaving her current job.

“I can not take this offer and it is unfortunate that [your company] does not see any value in me,” the email reads.

In a comment on her video, Jess wrote that the company has not responded to her email but has sent her reminders to sign the offer letter.

As of Monday, her video has received over 55,000 views, as fellow TikTokers applauded Jess for standing up for herself and refusing to accept a raise that would not have made a “meaningful difference.”

“You tell ‘em!!” one commenter said. “People started to say no to low wages, now it’s ‘people just don’t want to work anymore; whennnnn will these employers open their eyes?”

“The last time .33/hr made any meaningful difference was the 90s,” a second viewer argued.

Other viewers shared their own experience with hiring managers offering low wages.

“1 just went through the same thing,” one TikToker wrote. “They wanted to hire me for a manager position which I have 9 years experience with and only pay me .50 cents more.”

“Same happened to me a few months ago. I was like no bye,” another user added.

Someone else shared, “I had a company tell me that my 10 years of experience didn’t matter bc I would be new to the company.”

The Daily Dot reached out to Jess via TikTok comment, as other methods of contact were unavailable.