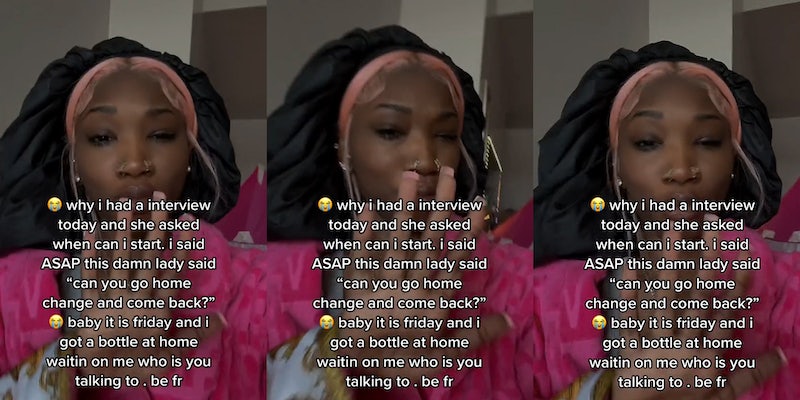 ‘Update: I just quit’: Job tries to get interviewee to ‘change and come back’ after she says she is available to start ASAP

'Honestly that's a red flag cuz why you need ME TO START ON A FRIDAY.'

A TikToker says that a company wanting to hire her got a little too eager with how soon they thought she’d be willing to start.

In the video, TikToker @xomyahrosee (Myah) says that the interviewer took her claim of being able to start work “ASAP” quite literally.

@xomyahrosee ♬ This is not my Batman glass. – Family Guy

The text overlay on the video reads: “Why I had an interview today and when she asked when I can start, I said ASAP. This damn lady said, ‘Can you go home, change, and come back?’ Baby, it’s Friday and I got a bottle at home [waiting] on me. Who is you talking to. Be [for real].”

The ask was enough to turn off Myah, who told her followers that she “just quit.”

It’s not clear from the video which company Myah interviewed at. It’s not also not clear whether the employer was serious about her coming in to work that evening.

Still, several TikTokers wrote in the comments that the employer’s ask was a “red flag.” The most-liked comment on the video, with over 2,100 likes, reads: “Not change and come back.”

“Lmfaooo they needed you REAL BAD,” one comment read.

Several others wrote that they’ve also had jobs ask them to start the same day they were hired—but that it could ultimately backfire.

“I had the same thing happen to me once when I was younger,” a third user wrote. “I hated the job and got fired the second day.”

“One time she gave me a shirt on the spot,” a fourth commenter wrote. “Like, girl didn’t even check my records yet.”

The Daily Dot has reached out to Myah via TikTok.