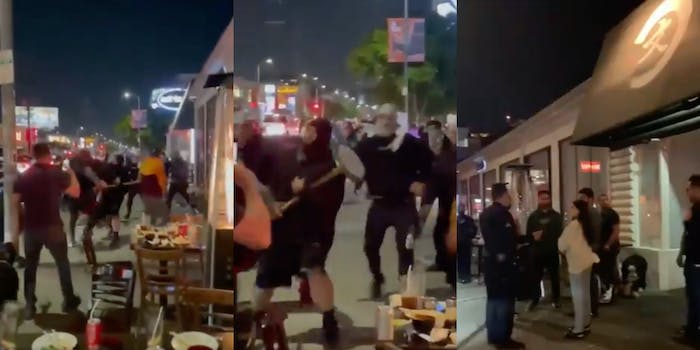 A viral video reportedly shows a group attacking a group of Jewish men in Los Angeles. The Los Angeles Police Department is reportedly investigating the incident as a possible hate crime.

The video was shared by zionist activist Eve Barlow on Twitter Tuesday evening and has since been boosted by comedian Sarah Silverman as well as pro-Palestine activist and actor Mark Ruffalo, garnering massive outrage online.

The first video, part of the thread shared by Barlow, shows one of the apparent diners picking up a metal divider outside a restaurant and proceeding to hit another man in a head covering in the head.

The man turns around, grabs the divider, and tries to hit back but misses. He is then joined by another man in a face covering.

The camera shifts for a bit, showing a series of blurs before returning to the original scene where the man in the head covering is seen punching the man who tried to hit him with the metal divider. The video of the apparent brawl has been viewed more than 57,000 times in 12 hours.

In another video, members of the group are seen talking to an officer outside the establishment. The men in the head and face coverings are not seen.

The incident reportedly occurred after men in nearby cars allegedly hurled anti-Semitic comments at Jewish diners outside a sushi restaurant. The diners yelled back, prompting the attack, according to NBC Los Angeles.

A witness, who is not Jewish, told CBS Los Angeles that the men in the cars also threw bottles at him and his Jewish friends who were dining together.

Another witness, on condition of anonymity, alleged that the men yelled many anti-Semitic slurs, including “dirty Jew.”

Another video shared in the thread by user @SussexFriends shows a group of men driving by screaming, “Israel kills children and women every day!” Someone from the diners’ group screams back, “Fuck you!”

“You guys should be ashamed of yourselves!” says another man in the car. In this video, no anti-Semitic messages can be heard, although there is a large amount of horn-honking and yelling recorded.

The anonymous witness also told CBS Los Angeles that the men who threw the bottles then got out of the cars and initiated the attack.

The LAPD confirmed with the Daily Dot that the incident is being investigated as a hate crime,

Sushi Fumi, the restaurant where the incident took place, declined the Daily Dot’s request for an interview when contacted on Wednesday afternoon.

The incident comes amid heightened tensions and massive protests about ongoing violence in Israel and Palestine. In just one week, following the Israeli government’s attempts to take over Sheikh Jarrah, a Palestinian territory, Israeli government forces have killed 200 Palestinians, including 59 children.

The takeover of Sheikh Jarrah would evict 13 families, which the United Nations human rights wing has said could amount to a “war crime.”

Following videos that surfaced on social media of the Israeli military firing into a mosque where Palestinians prayed during the last few days of Ramadan, as well as videos of Israeli lynch mobs hunting down Palestinians, massive protests have erupted across the world in support of Palestine.

At the same time, there has been a spike in anti-Semitic attacks, primarily across Europe and most significantly in Germany, including attacks on synagogues and anti-Semitic slurs being directed at Jews.

Ruffalo and Silverman, along with other pro-Palestinian activists on Twitter, voiced their concerns about the issue. “This is disgusting and wrong. Attacking Jewish people for the actions of Netanyahu must be called out. This is as bad as any violence against any people. This is why we need a #CeasefireNOW! Please @JoeBiden come out strong for an immediate end to this war,” Ruffalo tweeted on Wednesday in response to Barlow’s video.

“Jews in the diaspora need allies. WE ARE NOT ISRAEL,” Silverman pointed out. “And we sure as fuck aren’t the Israeli government. (Thank you to the mensch in grey).”