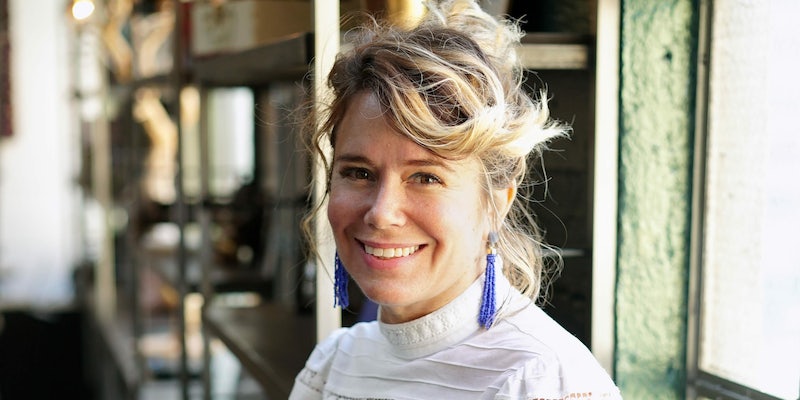 Women are flocking to her Instagram for the sparkly accessories, and staying for the real talk on mental illness.

On a recent sunny Saturday in Los Angeles, Jen Gotch was feeling all the things—cute, smart, and powerful. She was inside one of those rare good moods that often spark an out of body sensation in which you actually believe how happy you are. “I can do whatever I want and I’m gonna take on the world,” the founder of lifestyle brand ban.do thought, genuinely. Then a friend she’d had brunch with sent her a photograph. “I looked so stupid in it,” she says. “And from there I just spiraled into the darkest six hours.”

When life fades to black for Gotch, crying in bed is usually where she ends up, and this afternoon was no exception. Even though she was aware of what was happening, decades of personal experience have taught her that knowing better doesn’t make a difference when the chemicals in her brain get behind the wheel.

“I knew very quickly that the day was lost because I could just feel my brain cycling,” she explains. “I don’t know how much of that is depression and anxiety or just really self-destructive thought patterns that I’ve perfected over a lifetime.”

Gotch relays this story with no shame because she wants people to know that while she may be at the creative helm of ban.do, a multimillion-dollar company dedicated to positive affirmations, disco balls, and rainbows, she’s also a middle-aged woman suffering from bipolar disorder who will occasionally eat an entire pizza with beer for dinner.

It is this honesty, this duality of making her dreams come true while surrendering to the biology that can impede her hard work, that has made Gotch so popular, especially with women. For most, the mental health struggle is, by its very nature, a solitary predicament, which colors it humiliating and can create a vicious cycle that leads to even more isolation. By giving her psyche’s trash-talking devil a microphone, and full access to her Instagram account, Gotch has taken ownership of this narrative, empowering herself and inspiring her more than 174,000 followers.

“Personally, outside of social media, I’ve always been this way—I have a tough time with boundaries when it comes to personal stuff,” Gotch says. “I think that my way of building intimacy with people is telling them something really private right out of the gate, and I feel like a lot of women especially communicate that way.”

In fact, communicating that way is how ban.do got its start in 2009, when Gotch co-founded the company with a friend. From a roundtable of BFFs tossing out ideas about vintage hair accessories, ban.do has grown to a team of more than 40 people with offices in Kentucky and overseas. You can find Gotch’s unabashedly bubbly products, which range from a duffel bag announcing, “After this we’re getting pizza,” to a yearly planner reminding its owner, “You’re killing it!!!” in more than 3,000 stores across 50 countries. Gotch likes to joke about being completely unqualified for her position, but you don’t get to the top of a mountain like this without being a venerable boss woman.

“Before I started talking about things, people just assumed—even though I don’t look exactly like what someone would think the person that started ban.do would look like—I think there was still an assumption that I was nice, always happy, really fun, you know?” she continues. “And that’s not the case. I mean, I am all of those things, just not all the time—I’m a lot of other things too.”

Those other things include being a human who deals with depression, anxiety and ADD, all of which took nearly a decade to properly diagnose. Then there’s the turn her love life took this past year, when she and her ex-husband decided to officially split and get divorced. On top of all of this is the heavy pressure that comes with being the creative force upon which the entire company depends. She’s had to come to the hard realization that no matter what she does, she’s going to disappoint someone.

On Instagram, Gotch has been vocal about all of these struggles. She often gives herself an emotional rating, something her mother taught her to do at a young age, and will offer profound yet obvious insights. “I’ve suffered a loss of intimacy in every area of my life, and as someone who truly loves to be alone, I have discovered loneliness in a way I had never previously understood,” a post from this past October is captioned. “May I say, here, I have a fucking beautiful, charmed life that I am insanely grateful for, but the human condition leaves room for me to feel this and feel despair simultaneously.”

With more than 11,000 likes and 800 comments, the post is clearly touching a nerve. “For a platform that can make one roll their eyes a lot, you @jengotch are a breath of fresh air and you never fail to make me smile,” comments one of her followers. Another reads, “Thank you so much for being so brave and open, and inspiring. I know we don’t know each other but it helps me and means a lot.“

“That’s why it’s so resonant, cause it’s not even a niche thing,” Gotch says. “It’s not like, ‘Oh, only some people have it’—literally, we all have some version of that. The minority are actually the people that are like, ‘I feel fine. I feel adjusted.’ I don’t ever come in contact with that, but I feel like I come in contact with a lot of people that have varying degrees of suffering.”

When Gotch first began revealing her insides to the outside world, she says she would have a physical response to the vulnerability she was opening herself up to. She hiked out onto that limb, however, because while she describes herself as someone who is “never nude,” she doesn’t have the same need for cover when it comes to her emotional body. The electricity from the connections she makes in her community gives her all the fuel she needs to try and create a different and more positive feedback loop.

“I love to have an audience and I like to connect with people, especially people I don’t know,” she says. “I like strangers and hearing that someone I don’t know and have never talked to and lives somewhere else feels the same as me.”

In fact, despite all the blowback social media gets for being a vehicle for oversharing, licensed psychotherapist Amy Jones says once we move past the highlight reel, it can also be a useful tool to decrease the shame and isolation surrounding mental health issues. What’s key is that we’re honest about the complexities and ambiguities that are a part of real life.

“Carl Jung said that more difficult and less societally accepted parts of ourselves only become pathological when we deny them, and that any negative feeling can be integrated and managed if we bring it into the light to be examined,” Jones, who has never worked with Gotch, told the Daily Dot. “The more that we insist to ourselves and to each other that we should be nothing but graceful and poised, and pretend at the idea that there is anyone who has it all figured out, the sicker we are going to become as individuals and a society.”

Gotch is the first person to admit that her ability to share all her internal strife comes from a place of privilege. She knows she’s fortunate, especially when it comes to the limited negative criticism she’s received. Even when someone does respond negatively, instead of being hurt, Gotch holds space for this person’s opinion and is curious about how she can help them shake that anger.

“I’ve just been lucky, so I’m just trying to take that luck and put it out there because I don’t think most people share my experience, where they haven’t felt really stigmatized,” she says. “Somehow I’ve used it to my advantage.”

“If you’re not gonna die from it, you could at least use it to empower yourself and empower others,” continues Gotch. “But it can be totally embarrassing if you think about it. I just don’t think I’ve contextualized it that way in a long time.”

Now that she’s on the other side of the shame component, the idea of anyone being uncomfortable about their personal struggles is like a bad taste in her mouth, and Gotch can’t help but feel compelled to sweeten that void. Because as trending a topic as mental health is, it remains a loaded subject. She knows that sometimes people are just going to find it hard to believe what they can’t see with their own eyes. Hell, she’s been researching her brain for 20 years and still has trouble understanding its intricacies.

Perhaps the biggest revelation Gotch has had thus far is the last thing she ever imagined possible: that she is, in fact, not alone. Growing up, her mom dared her to be different, a valuable piece of advice she still thinks about every day, especially as a designer and whimsical trendsetter. But she’s also realized that even though her idiosyncratic sense of creativity has brought her success and made her who she is, humans all have a lot more in common than they believe. She’s not the only one who looks back and forth between one photo of herself she thinks is beautiful and another she thinks is hideous, and wonders, “Well which one am I?” The self-acceptance that has come with this knowledge only makes her want to shout it from the treetops even louder, so that others can feel what she feels.

“I felt so alone in that problem and I was like, this is so weird that I feel this, who would be confused about that? And then to have it be like, actually, everyone feels this,” Gotch says. “It was heartbreaking, but also I was like, ‘Am I the Everywoman? Do I have everyone’s problems?’ It just motivated me to do more because what else can I uncover for people?”