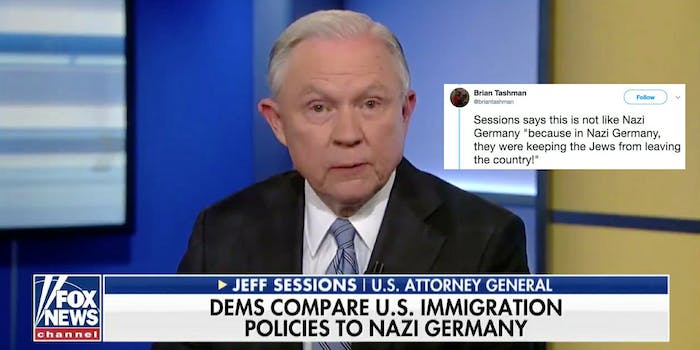 He offered a flippant response to the trauma of thousands.

Don’t worry, folks, the facilities used to split apart and detain children from parents are conceptually nothing like other imprisonment camps used in human rights atrocities past. Particularly not in Nazi Germany. How could they even be close to comparable when Nazis were preventing Jews from leaving the country, while the U.S. is keeping immigrants out by…. locking them up in cages?

At least, that’s what Attorney General Jeff Sessions thinks of his “zero tolerance” policy to prosecute every adult immigrant crossing into the U.S. unauthorized, thereby separating them from their children.

Speaking to Laura Ingraham during a Fox News interview on Monday night, Sessions called the accusations that Trump’s immigration policies are comparable to the practices of Nazi Germany a “real exaggeration.” But instead of, you know, acknowledging that the U.S. wasn’t murdering 3 million people, nor targeting people for the color of their skin, or for the countries they’re arriving from, he decided to aim low with his rationalization as to why the two moments in history are completely different.

“Well, it’s a real exaggeration, of course. In Nazi Germany, they were keeping the Jews from leaving the country, but this is a serious matter,” Sessions replied.

Attorney General Jeff Sessions: "We want to allow asylum for people who qualify for it, but people who want economic migration for their personal financial benefit…is not a basis for a claim of asylum." @IngrahamAngle pic.twitter.com/ae0QoEMAVD

Of course, comparing Nazis and the Holocaust to anything generally discounts the suffering and persecution that Jewish people and many other minority groups endured, and making such comparisons are often gross and mischaracterizing. It is, however, something that droves of people on the left, and at least one Holocaust child survivor too, have done in order to humanize and put into context what is happening to children separated from their parents. And that, too, can also be done without comparisons made by people who didn’t endure Nazi Germany: These children are undergoing intense mental and emotional trauma as a result of the separations, and their horror and fear are now available for the world to hear.

But that doesn’t make Sessions’ response any less boneheaded. If anything, his response, that they’re just trying to keep people out, seemed flippant and uneducated at best. If he wanted to actually refute the comparison, he could have drawn on a number of things—the conditions of the private child detention centers, such as Texas’ Casa Padre, which has a movie theater and basketball court (but houses five children per 40-square-feet for sleeping spaces and only allow children outside for two hours a day).

Or, he could have mentioned that, in some child detention centers, siblings of different genders can see each other once a week, and can make short phone calls to outside family (but not to their parents).

Or, he could have tried to explain that at least these immigrant children, many who don’t know English, some who are as young as toddlers, are now expected to navigate the immigration system themselves and plead their cases to a judge to explain why they should be able to stay in the U.S. (all the while detention center workers are not allowed to touch or coddle crying children, or comfort them with a hug, and immigration attorneys can’t even help these children help themselves because they’re so scared).

This isn’t Nazi Germany, Sessions said. But this is still a really fucked up situation for the children involved, no matter how much you despise being compared to a Nazi. Even Ingraham, during the same interview, characterized the detention centers as “summer camps” herself. To so quickly shake off that assertion by attempting to clear a bar as low as “we’re keeping people out, not keeping people in, like the Nazis,” shows just how little you care to look at this situation of child abuse for what it really is.

At least Sessions was honest to admit wanting to keep people out of the country, not even qualifying his “we aren’t Nazis” statement to explain if he was speaking specifically of undocumented immigrants, asylum seekers, or all immigrants from south of the border.

Across Twitter, viewers of the Fox News interview took note of Sessions’ short rebuttal to the assertion that his zero-tolerance policy was creating “shelters” akin to concentration camps of Nazi Germany.

Sessions says this is not like Nazi Germany "because in Nazi Germany, they were keeping the Jews from leaving the country!" pic.twitter.com/v2BiWN8aXj

Anyone catch the excitement on @jeffsessions face when he told Laura Ingraham the Nazis were trying to keep the Jews from leaving the country?

Jeff Sessions and Laura Ingraham do not actually know what Adolf Hitler did. They don't! It's that simple. They know a lot of people died. That's it. Just absolute stupidity.

Here's the argument Jeff Sessions just made to @IngrahamAngle to refute the concentration-camp comparison some are making re his immigration policy: "No: In Nazi Germany, they were keeping the Jews from *leaving* the country."

Guys, don’t worry. Jeff Sessions assured me that this is different from the Holocaust because Nazis were trying to prevent Jews from LEAVING the country, not from ENTERING it. Glad that’s cleared up.

Sessions might want to brush up on his history before answering any further questions comparing his policies and Trump’s administration to Nazis, lest he skate over it once more while also rewriting the immigration narrative as it happens.