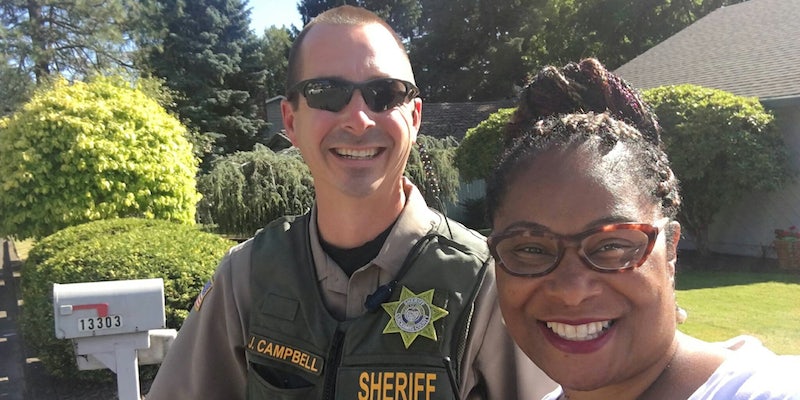 She thanked the officer who took the call for being 'professional.'

An Oregon state representative says police were called on her while she was going door-to-door to canvas in her own district.

Rep. Janelle Bynum, a Democrat, posted to Facebook on Tuesday to thank the deputy who took the call in Clackamas County, Oregon. She praised his response to the woman who called 911 to question the motives of a Black woman going about her job.

“Big shout out to Officer Campbell who responded professionally to someone who said that I was going door to door and spending a lot of time typing on my cell phone after each house—aka canvassing and keeping account of what my community cares about!” Bynum, 43, wrote.

Live from the mean streets of Clackamas!!! Big shout out to Officer Campbell who responded professionally to someone who…

She added that she wanted to meet with the woman who called the police, but since she was unavailable, they spoke over the phone.

“We talked and she did apologize,” Bynum wrote. The caller’s race is unknown, the Oregonian reports.

Bynum has represented District 51 in Oregon’s House of Representatives since 2016. She told the Oregonian that after years of campaigning—she says she’s knocked on over 70,000 doors—this was the first time someone called the cops on her.

“It was just bizarre,” Bynum told the publication. “It boils down to people not knowing their neighbors and people having a sense of fear in their neighborhoods, which is kind of my job to help eradicate. But at the end of the day, it’s important for people to feel like they can talk to each other to help minimize misunderstandings.”

The incident comes after a spike of white people calling the police on Black people going about their business. Women dubbed by the internet as “BBQ Becky” and “Permit Patty” reported a group of people barbecuing and an 8-year-old girl selling water bottles, respectively.