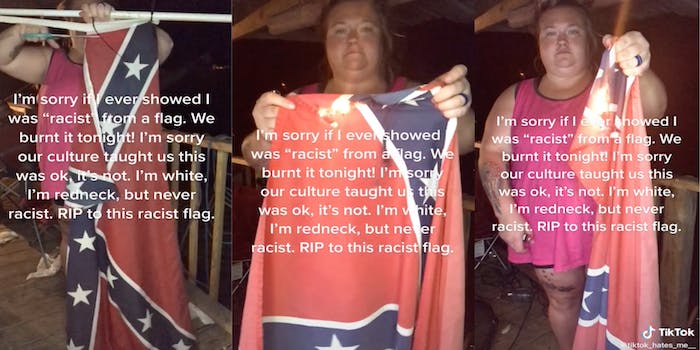 IRL newsletter: The road to anywhere

Plus: Where you can get free weed for getting a COVID vaccine.

Woman realizes Confederate flag is racist—and burns it on TikTok

A video of a woman apologizing while burning her Confederate battle flag has gone viral on TikTok with more than 492,000 views.

The video shows user @tiktok_hates_me__, whose name is Danielle, cutting the flag from a pole with scissors and burning the corner of the flag with a lighter. “I’m sorry if I ever showed I was ‘racist’ from a flag,” the video caption says. “I’m white. I’m redneck, but never racist. RIP to this racist flag.”

“I grew up in South Georgia,” one user commented. “It was just a thing that was seen as heritage. Nobody saw it for what it stood for.”

“In short, the flag has been used by various groups of people who oppose civil rights,” Danielle says in a follow-up video. “In particular, civil rights of Black people and minorities.”

Many people online said their respect for her went up and praised her for making the change to educate herself on racist symbols.

“Thank you for swallowing your pride on this,” one user commented. “People need to see this.”

In some U.S. states, getting your COVID vaccine could earn you free marijuana.

Washington state’s “Joints for Jabs” campaign is offering one pre-rolled joint to anyone who receives their first or second dose at an on-site vaccination clinic. The campaign, effective immediately, will run through July 12 and is available to anyone 21 or older.

D.C. has its own Joints for Jabs campaign and is likewise offering free joints in exchange for a vaccination. New York is taking a similar approach, but the state—along with D.C.—has struggled to track down enough cannabis to fit demand. Due to regulations, it can be difficult for licensed distributors to donate marijuana. All of the weed included in the Joints for Jabs campaigns has been donated by home growers.

In other states, like Arizona, dispensaries are offering their own incentives. The Mint dispensary has offered customers a free edible for proof of a vaccine, and Greenhouse in Michigan is offering a free pre-rolled joint.

The campaigns have been massively effective. As noted by Greenhouse owner and CEO Jerry Millen, the company’s campaign has garnered an “overwhelming response.”

The road to anywhere

For many during the year of quarantine, road trips became the only way to escape. Whether it was 30 minutes or a full day’s drive, getting in the car became one of the few ways to get a real change of scenery.

This summer, as air travel ramps up—and gets more expensive—an old fashioned road trip may still be one of the best ways to get out there. This weekend, my partner and I will be loading up our car and our two cats for a 1,300-mile to our new home in Salt Lake City, Utah. After 12 years in Texas, it will be a bittersweet journey.

We have our car snacks and an audio book, Donna Tartt’s The Secret History, ready to go. We planned our lunch stops, and we know to expect unexpected road blocks and delays. After a week off from the Thursday Internet Insider, I’ll be back on the other side with more self-care thoughts. Until then, see you on the highway.