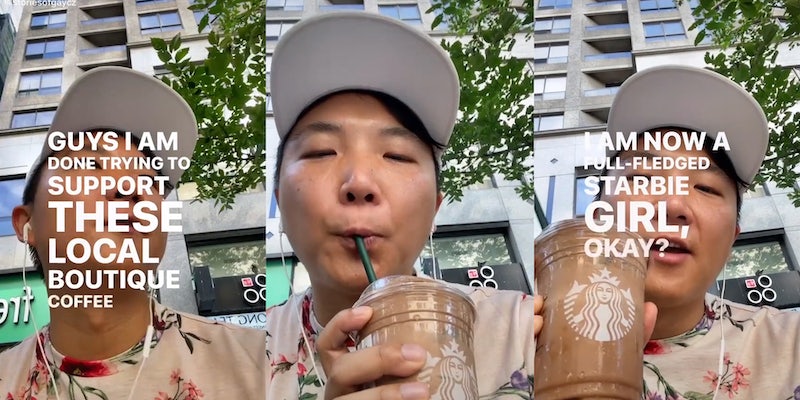 'You always feel compelled to tip these baristas because they ask you on these giant iPads.'

In a viral TikTok, a customer called out tipping culture as he compared his experiences at local, boutique coffee shops to Starbucks.

In the video, he films himself complaining about the baristas in local boutique shops and explains that he waited in line for 20 minutes, only to find out they didn’t even have the drink he wanted.

“These boutique coffee shops are not even cheap, and you always feel compelled to tip these baristas because they ask you, on the giant iPads, ‘Do you want to tip?’ and the guys behind you are judging you if you don’t tip,” he says. Seemingly angered by the whole ordeal, he proclaims he’s “done with these local boutique shops” and that he’s going to stick with Starbucks.

The video provoked users to debate on tipping culture, or the uptrend in the expectations of tips with iPad point-of-sale systems, which prompts users to tip on purchases that may not normally require them. Many viewers on TikTok agreed with the TikToker’s stance. “Finally someone said it. Sincerely, one of those boutique coffee shop baristas,” one commenter said.

Another commenter agreed that It’s easier to stick with Starbucks. “I can literally walk into any Starbucks and get my coffee the way I like it even if it’s not on the menu and they’re always so nice,” another said.

However, the video was eventually spotlighted on Twitter, where viewers were more critical.

“People on tiktok make so many rude videos punching down at service workers but they think they’re punching up bc the baristas they’re talking about have cool privilege. Embarrassing!!” a Twitter user wrote before posting @storiesofgaycz’s TikTok.

“Lmao ‘it’s ridiculous that I can’t value/compensate this person’s labour at a cheaper rate – Starbucks really has it figured out’ is not the take that buddy thinks it is,” another user on Twitter said.

This isn’t the first time “iPad tipping,” and tipping culture as a whole, has been criticized on TikTok. Even workers have spoken out against asking customers for tips through an iPad. However, Starbucks as a company is no stranger to controversy for its alleged working conditions, and, in the past, there has been a general consensus that if the worker is preparing a food or drink item for the customer, tipping makes sense. After all, customers are even given the option to tip via the mobile app, or in-person via a physical tip jar, at Starbucks, where, according to Indeed, the national average hourly wage is $14.37.

The Daily Dot has reached out to @storiesofgaycz via TikTok comment.