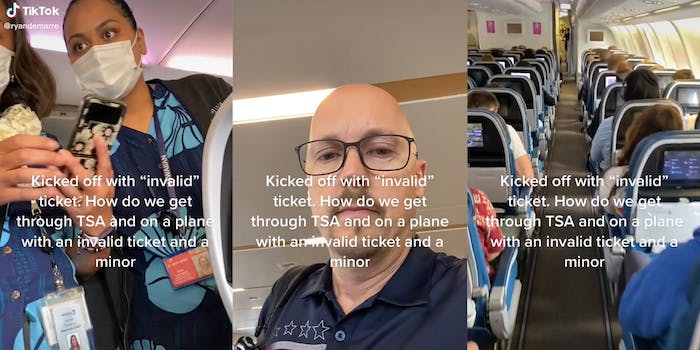 ‘How do we get through security and on a plane with a minor with an invalid ticket?’: Customer says they were kicked off Hawaiian Airlines flight after boarding

He also says his daughter’s luggage stayed on the flight headed to Maui.

A man filmed Hawaiian Airlines workers asking him to exit a plane and telling him his “ticket is invalid.”

TikToker Ryan (@ryandemarre) posted the video featuring him and his daughter exiting the plane on July 2. “Is there a problem with my ticket?” Ryan asks a worker on the plane.

“OK they’re asking us to leave,” he says.

Another worker takes him to the “boss.” “Your ticket is invalid,” a worker says before confirming the family will not be making the flight.

The video received over 2 million views and was captioned, “Hawaiin airlines kicked us off the flight for an ‘invalid’ ticket. How do we get through security and on a plane with a minor with an invlaid ticket?”

Viewers were similarly confused and tagged the airline in the comments section.

“Something is not adding up – What was their justification? How much did you pay for the original tickets?” another questioned.

Ryan says in a follow-up that the worker couldn’t give them a solid reason as to why the ticket was considered invalid.

Ryan says he offered to run his card again to try and make the flight but that the offer was denied. He also says his daughter’s luggage stayed on the flight headed to Maui, while they would have to wait another day before catching another flight. He says they were able to catch a flight to Hawaii the same day through Delta Airlines, which set them back about $2,000. He adds that it was too late to get a rental car, so he had to Uber.

“Hawaiian Airlines, I am expecting a full refund for both mine and my daughter’s flights plus our Uber and I think you guys owe me an apology,” Ryan says.

Ryan also tells viewers he bought the tickets four months ago directly through Hawaiian Airlines. He also says he was the one getting kicked off the plane, not his daughter.

In another video posted on July 6, he says he spoke with Hawaiian Airlines, and the airline allegedly admitted the incident was a mistake on its end and apologized. He says the airline also offered to pay for his Hawaiian Airlines flight, the Delta flight, and his Uber, leaving Ryan happy with how things turned out.

The Daily Dot reached out to Ryan via TikTok comment as well as to Hawaiian Airlines via telephone and email.