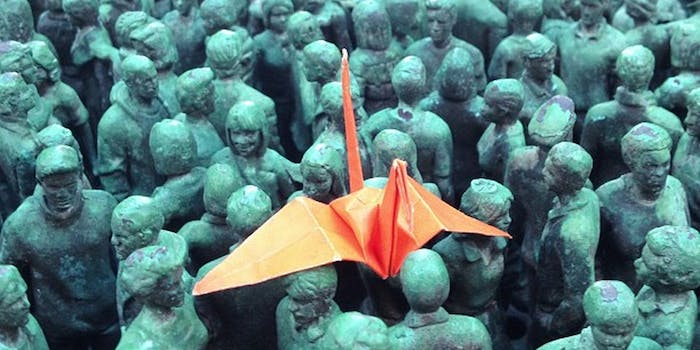 Have you spotted one of this Instagrammer’s 1,000 paper cranes?

An Instagram user is leaving beautiful paper cranes all over the globe. Have you seen one?

As long-term travel photography projects go, this sure beats taking selfies on every beach you happen to sink into.

An Instagram user by name of pastameck is sharing photos from around the world. Rather than stuffing a suitcase full of cheap souvenirs for family and friends, pastameck is actually leaving something each place he or she happens to be.

The photographer is placing a thousand origami cranes all over the planet, documenting them with Instagram photos and geotags as a reminder of when and where each paper creation was left.

Rather than hoarding crane models at home, “I get much more satisfaction leaving them behind for people to find,” pastameck wrote on Reddit. “Hoping it will bring some joy to someone’s day!

The project also makes pastameck’s “random walks more interesting, since i keep scouting for interesting/funny/cool places to leave one behind, and take a picture.”

So far, pastameck has left cranes in New York City, Chicago, Los Angeles, Sweden, and India, among other locales over the last year. With 428 photos down, there’s still a long way to go. Thankfully, the planet’s a big place with plenty of options to stash the other 572 origami models.