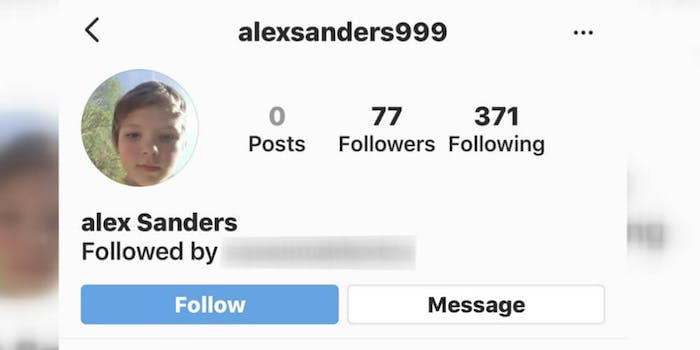 A principal who loves FBI and CSI shows investigated the account.

A middle school principal is being lauded for investigating an Instagram account that was allegedly sending inappropriate messages to her students.

Jamie Brooks, the principal at Community House Middle School in North Carolina, first became aware of the issue after receiving an email from a concerned parent.

The email detailed a threatening Instagram private message that was sent to one young middle schooler. What Brooks initially believed to be a case of bullying suddenly evolved into something much worse once she began doing some amateur sleuthing.

“I love my FBI and CSI shows,” Brooks told WCNC

The account in question, AlexSanders999, followed roughly 100 accounts, nearly all of which belonged to young boys. Upon further digging, Brooks discovered that 10 of the accounts AlexSanders999 followed attended her middle school.

Sanders called the child who had received the threatening message mentioned in the email down to her office and was told that he did not know who ran the account.

The principal then spoke with the other 10 middle schoolers who were followed by the account and discovered that none of the students knew who AlexSanders999 was either.

“Every one of them told me the same thing,” Brooks said. “He looked like somebody I should know and I saw friends of mine who he was following.”

Sanders says it quickly became apparent that whoever was behind the account was not a child who attended her middle school.

Several students also revealed that they too had received increasingly hostile messages from AlexSanders999.

“We discovered that this Alex Sanders account was asking a lot of questions that were progressively getting more and more inappropriate,” Brooks said.

The account would first say hello before asking for pictures of the students’ faces. Those who denied the request were met with profanity. Those who did reply were then asked to send even more photos.

A parent joined Brooks in her investigation by creating a fake account designed to look like that of a young boy and followed AlexSanders999. The parent was quickly contacted by the account and received the same type of messages that the middle schoolers did.

Brooks chose to then send out an email alert to parents before Thanksgiving to encourage them to be mindful of such online dangers.

“Don’t freak out, because this also may be nothing,” the email began. “But it might be something and the only way you’re going to be able to be certain is to pay attention.”

The principal says she also shared her story with the media in the hopes that parents would open a dialogue with their kids.

“All of the kids here who followed this kid back–they’re great kids,” Brooks said. “From great households where parents have taught them about internet safety, and it just goes to show that any kid can get sucked in pretty easily.”

Both the school and several parents reached out to Instagram to see if the account could be removed but did not receive a reply. Although the account was said to still be active on Wednesday evening, a search for AlexSanders999 on Instagram by the Daily Dot yielded no results at the time of publication.