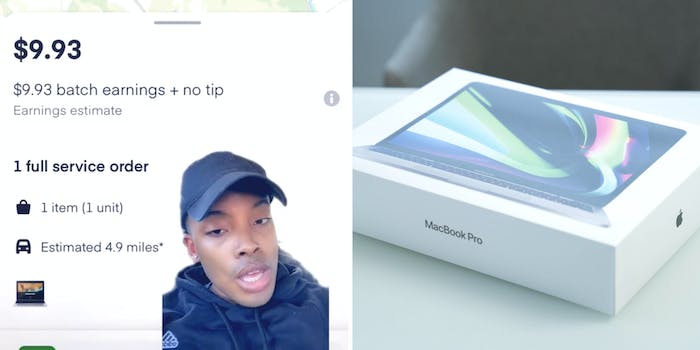 Commenters suggested the tip was out of the customer's control.

An apparent Instacart shopper took to TikTok to air his grievances regarding tipping on the app—but his pickup was a little different than the average grocery run.

When a customer ordered a MacBook for pickup, but chose to leave no tip, Anthony Paul (@anthonycpaul) called them out for it. Paul’s video has received over 60,000 views as of Monday.

“Now I know you hoes aren’t out here placing orders for MacBook computers to be picked up and delivered to your homes, and you ain’t got no money for a tip?” they said in the video. “Okay.”

Some commenters agreed, joking that he should take the computer as his tip and run.

“Tell them,” one commenter wrote. “I don’t get how they don’t think that it’s not a service to deliver packages, it should be looked at like eating at a restaurant, tip.”

Others pointed out that if a customer selected same-day delivery from their local Apple retailer, the store might contract delivery apps to take the item, leaving the matter of tipping out of the customers’ hands.

“Nahhh this (is definitely) same day shipping through Apple,” another commenter wrote. “I’ve done this before with a charger. They just notify us with a time slot.”

Another commenter wrote that video game retailer Game Stop had done something similar. When they had selected same-day delivery, Game Stop had sent a DoorDash runner.

“I ordered something from Game Stop and had no clue it was coming via DoorDash it didn’t even allow me to tip,” they wrote. “I chased her down and cash tipped.”

The Daily Dot has reached out to Paul via Instagram DM, as well as to Instacart directly regarding its tipping policy.