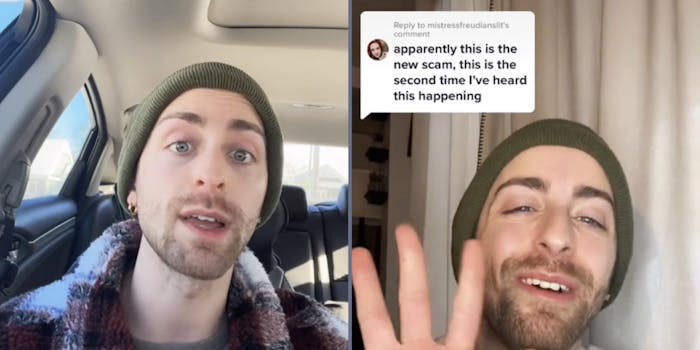 ‘I have bills due’: Customer allegedly scams Instacart driver, tries to steal his earnings (updated)

'Someone smart and tech savvy can get scammed because they’re being forced to panic.'

The story of an Instacart scam has gone viral on TikTok after a driver was allegedly duped by a customer.

The original video has received over 2.4 million views and users are sharing stories they’ve heard about this Instacart scam happening to others.

Nick (@niicky_diicky) filmed a video explaining the ordeal on TikTok. Allegedly, Nick’s customer canceled their order, but then complained to Instacart that their food was stolen.

Then, the customer allegedly tricked Nick by impersonating an Instacart representative and handling the complaint on the phone. The customer asked him for a verification code and used it to break into his account, lock him out of completing any more deliveries that day, and take the money out of his account.

@mistressfreudianslit said, “Apparently this is the new scam, this is the second time I’ve heard this happening”

@chadfaulkner8 added, “I’ve had this happen with DoorDash too they stole $100”

@jumpcannon commented, “This is a great example of how someone smart and tech savvy can get scammed because they’re being forced to panic. Always get off the phone and reset!”

Nick also filmed a follow-up video to answer questions. He says he got his account back and did not lose any of his earnings. Nick also said that the customer put in false information for the order.

An Instacart representative confirmed to the Daily Dot that the issue was resolved.