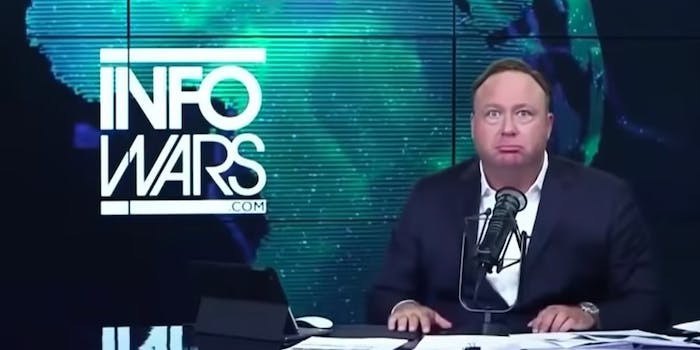 The former staffer slammed InfoWars and Jones in an explosive, tell-all NYT essay.

A video editor for InfoWars penned a tell-all essay about working for the far-right website and under Alex Jones, a person he used to admire.

In the New York Times essay, published on Thursday, Josh Owens expressed his regret for working with Jones. Even the essay is aptly titled, “I worked for Alex Jones. I regret it.”

In the four years he spent working with Jones, Owens says he both experienced and saw a toxic work environment, from Jones never wearing a shirt and drunkenly instructing his staffers to punch him in the face to him almost shooting Owens and driving while intoxicated. Owens lays out one of the most damning regrets: Helping Jones connect a Muslim community to terrorism.

In 2015, Owens, along with other InfoWars staffers visited Islamberg, a Muslim community north of New York City, in order “to investigate what Jones instructed us to call ‘the American Caliphate.'”

The community was previously accused of terrorism (accusations that have since been proved false), and the InfoWars crew falsely claimed they were going to “debunk” the allegations. Only the information they received didn’t fit the Islamophobic narrative they were hoping to come away with. Owens described the community as “kind, generous neighbors” in his essay. So they decided to lie.

“The information did not meet our expectations, so we made it up, preying on the vulnerable and feeding the prejudices and fears of Jones’s audience,” Owens wrote.“We ignored certain facts, fabricated others and took situations out of context to fit our narrative.”

They later went on to fabricate sensationalized headlines, including “The Rumors Are True: Shariah Law Is Here,” “Report: Obama’s Terror Cells in the U.S.,” and “Infowars Reporters Stalked by Terrorism Task Force.”

After Owens quit in 2017, Jones allegedly called him hoping to recruit him back.

“You think I want to keep doing this? I haven’t wanted to do this for five years, man,” Jones allegedly told Owens during the phone call.

Owens says he only joined InfoWars at 23 years old because he was “vulnerable, angry, and searching for direction.” He previously dropped out of college.

“I wasn’t angry with others,” he wrote. “I was angry with myself. And once I realized that, it was easier to walk away.”

The Daily Dot has reached out to InfoWars.