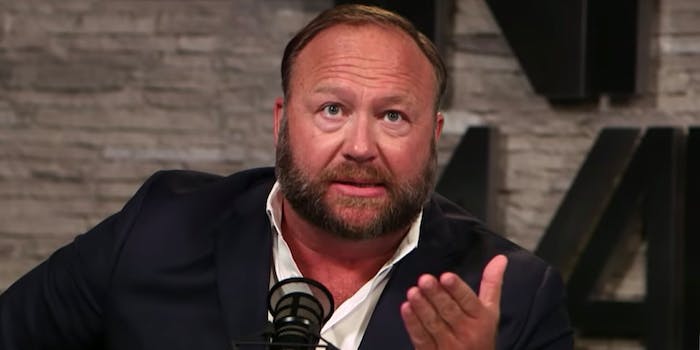 InfoWars had been ordered to hand over a bundle of its internal electronic files as part of an ongoing lawsuit by Sandy Hook families.

“This court has an obligation to protect the attorneys, parties and the judicial process,” the lawyers wrote.

Despite initial confusion online, owing to poorly written headlines suggestive that Jones had solicited the images, it quickly became clear that, in fact, he likely did not know the images were within the file bundle when he turned it over, unreviewed, to the plaintiffs’ lawyers.

In an episode of Jones’ show on Friday, his lawyer Norm Pattis explained to viewers that the FBI had been investigating InfoWars for several weeks after 12 emails sent to InfoWars were discovered to contain illicit images of children. The FBI confirmed that no InfoWars staff members had viewed the emails.

A hearing on the matter has been scheduled for June 18.

Read the filing in full here.

This article has been updated for clarity.