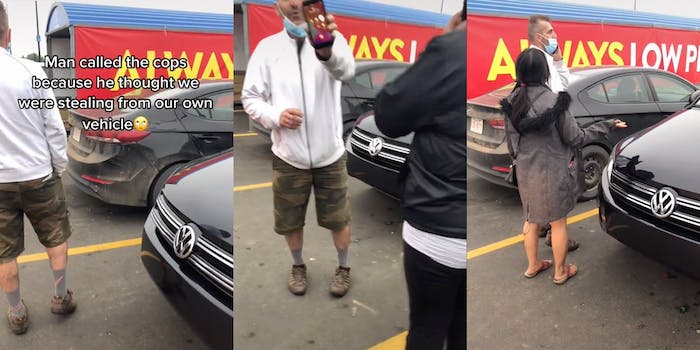 ‘Who the hell does stuff like this?’: Indigenous TikToker shows male ‘Karen’ calling the police on her in parking lot

The TikToker was trying to get into her own car.

A viral TikTok series shows a white man call the police on an Indigenous woman for trying to access her own car.

The woman, Taniah Swampy or @taniahswampy on TikTok, posted footage of the male Karen standing by her car waiting for the police to show up. She captioned the video, which has received over 1.4 million views, “Racism needs to stop man!! Waste of our time having to wait for the cops just to tell us we’re good to leave.”

Even the man’s wife tried telling him to leave Swampy and her companions alone, Swampy claimed. The man can be seen in the video proudly showing his phone screen while he is on the line with the police.

It’s unclear from the TikTok what exactly prompted the man to call the police, but Swampy prefaced the video by saying, “Man called the cops because he thought we were stealing from our own vehicle.” The video’s audio is set to the TikTok sound “Oh No.”

Viewers were disgusted at the man, and several felt his actions were undeniably racist.

“He should be charged for wasting tax payers money for the police to even respond to this call,” one viewer commented.

Another viewer asked, “Why is America like this? Calling the cops because you don’t believe someone driving a certain car?”

In a second TikTok, Swampy shared another clip of the incident that showed what the man did after realizing it actually was her vehicle.

“He said we hit his vehicle just so the police could continue to come,” the on-screen caption read.

Several viewers pointed out how irritated the man’s wife looked by that point.

“I think the wife is going to divorce him,” one viewer commented. Another said, “I feel so sorry for his wife. She deserves better.”

In a third and final TikTok, Swampy showed footage of the police finally arriving. Apparently, the police said she and her companions had to wait for the man to leave before they could.

“Basically all the drama for nothing,” she said in the video’s caption.

“I would [have] pressed charges for harassment,” one viewer commented.

“Who the hell does stuff like this? In a Walmart parking lot? Are we just going to assume every person walking to a car is stealing it? Wow,” another person said.

One viewer asked if the man at least apologized, to which Swampy replied, “Nope.”

Swampy did not respond to the Daily Dot’s request for comment.